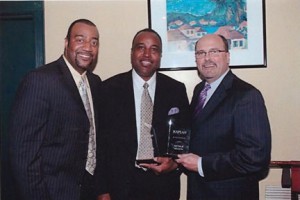 Arthur Nelson, Territory Manager and a resident of White Hall, was awarded the 2009 Rookie of the Year and 2009 Road Scholar Award for his dedicated service to the state of Alabama and northern Mississippi region.

These awards are presented to sales team members who have demonstrated achievements in sales by Kaplan during the course of the year and serves as a tremendous accomplishment and the result of hard work and dedication to their customers.

“Building relationships and resources has been key,” said Nelson. “Byron Fulton and Tom Dodd have been very supportive of me and my achievements.”

Nelson served as the President of the Alabama Head Start Association for 26 years, served as president for the region IV Head Start and lived within Lowndes County all his life.

After graduating from Hayneville High School in 1973, Nelson wrote in his Senior annual that he would be a traveling salesman.

Nelson said he had no idea that God would fix things to allow him to do the work with which he is currently involved.

“I get to get out, meet new customers and try to act as a resource for them as well,” said Nelson.

A member of the First Baptist Church in White Hall, Nelson operates as the Superintendent for Sunday School classes, is a functioning member on the church’s deacon board and sings in the male chorus.

Nelson joined the Kaplan Early Learning Company in 2008 and is one of the many individuals who support the foundation of the company’s organization.

The Kaplan Early Learning Company was founded in 1951 by Leon and Renee Kaplan and serves as a leading international provider of products and services which enhance children’s learning.