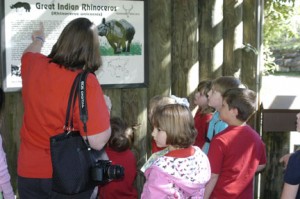 Michele Rogers (left) points as she reads to students at Lowndes Academy a detailed description of the rhinoceros and its habits on a field trip to the Montgomery Zoo last Friday.

As with any trip to a zoo, monkeys can often be the subject of laughter and the highlight of discussion for many first and second graders.

That was the case as students from Lowndes Academy embarked on a field trip to the Montgomery Zoo and saw the insidious nature of many animals last Friday.

Parents and teachers chaperoned the large group of children from place to place along the Zoo walkways, being sure to keep headcounts of everyone there.

The tour moved on with exhibits of rhinoceros, alligators and, of course, monkeys.

All of the children laughed, giggled and traded stories about some of the awkward behavior the monkeys demonstrated.

Many of the kids could be seen trying to venture off to observe other animals and often getting mixed in with other groups of students there to see the same exhibits.

The initial stop for everyone was the playground where scores of children climbed up slides, and swung on a suspended merry-go-round and a rope tied to resemble a spider-web.

Most of the students snacked from lunchboxes periodically as they made their way back and forth from the playground area.

Parents and onlookers alike chuckled at the sight of the slew of children being hoisted up to grab the bars of the merry-go-round suspended from a center-pole, only to be flung from the contraption.

As the children pressed forward on the walk, the chaperones found themselves hustling to keep track of which students were in which assigned groups.

When all the outer exhibits and animals had been seen, the kids moved to the museum where they were able to see examples of the many mammals, arachnids and sea-life which inhabit the planet.

And as children do, many zoomed through the museum at break-neck speeds to see what was around the next corner.

The tail-end of the line caught up with the pack leaders and the groups made their way to ride the train.

Park employees guided the children through the maze of ropes as they made their way to the entrance of the ride.

After everyone was seated and the chains alongside the train were latched, the conductor instructed everyone to keep hands and feet inside the cars. And, of course, some children had to do just the opposite.

The trip was similar to that of the movie Jurassic Park as there were little opportunities to see the exhibited animals.

Though as the train came to a halt, the students were just as pleased as if there had been more to see.