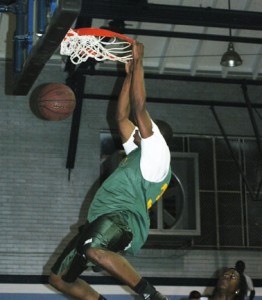 Antijuan Ball slam-dunks the ball on his opponents at the Williams family Basketball Tournament on Friday.

The Williams family hosted their bi-annual family reunion at the Hayneville Middle School gymnasium this past Friday, and basketball players from the towns of Mosses, Braggs, Collirene, Hayneville and the city of Prattville participated in the games for bragging rights.

Teams from White Hall and Calhoun were unable to be reached in time to attend the basketball game.

To kick off the event, children from the surrounding areas of Lowndes County played against each other in a half-court game.

With about 200 people in attendance from within each community, all were cheering on their family members, friends and favorite players.

After the children’s game, players from various high-school teams took each other on in a series of four matches throughout the night.

Each winning team played against each other in games to determine who would go home with a trophy.

Key players on each team went head-to-head in the athletically challenging games with 3-point shots hitting nothing but net and some players dunking on others.

“We hold our reunions every two years,” said Oliver Williams. “This is a good way for the kids in the community to come together and have fun.”

The last Williams family reunion was held in Detroit with an estimated 400 in attendance.

As the games continued, players from each team were being watched closely on their performance to see who would go home with the trophy for the most valuable player.

Each game was followed by a short eight-minute break to allow the participants to rest for their next match.

During the breaks, a couple of the people and players in attendance would entertain the crowd by doing back-flips and somersaults while running or standing on the bleachers.

Collirene’s B-team played against the Hayneville B-team in what could be called the most entertaining match of the evening.

MVP Antijuan Ball of Collirene’s B-team slam-dunked the ball an impressive five times against his opponents giving his team a solid scoring advantage by the game’s end.

Players Ball and Marcus Wright, Jr of Hayneville’s B-team were awarded trophies for most valuable players to cap off the evening.

“We want to thank all of the teams from Prattville, Mosses, Braggs, Hayneville and Collirene for participating,” said McCall.