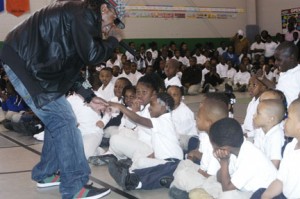 George Jefferson can be described as one of the most recognizable television characters during the 1970s.

This week, the character’s bandy style was used by rap artists Big Gen and Snipe Save Ya Folks (SYF) to help energize some Lowndes County students in preparation for next week’s SAT 10 and ARMT testing.

The Birmingham rappers made a guest appearance at Central Elementary to provide motivation and inspiration for the upcoming tests.

“Education is always contending with the media,” said Principal Mary Phelan-Jackson. “That is why we enjoy getting artists who utilize music children are familiar with to motivate them to make good choices in everyday life.”

The concert took full swing as DJ Dirty Vegas cranked the volume and spun his turntables allowing the artists to take center stage.

Music rang out with a catchy beat and enticing rhythm for a song entitled Stroll when both artists swaggered in a manner reminiscent to that of George Jefferson as they made their ways to the back of the gymnasium.

The motivation of the piece was to encourage children to “stroll” away from influences which do not allow them to succeed in everyday life.

As the song faded out, both artists proceeded to explain in short detail to the students about George Jefferson and his infamous swagger.

“Doing this type of work takes me back to a time when I was their age,” said SYF artist Big Gen. “All children need someone to relate to and we want to be able to connect with them.”

Students watched in excitement and were allowed to participate as the musicians made their way around the entire gymnasium giving high-fives. The group often pointed microphones in the direction of the crowds using them as backup singers on a song called Higher.

Before the concert, students and faculty members were all smiles as they filed into the gymnasium in anticipation of the artists appearance.

After arriving fashionably late, the musicians quickly set up their speakers and sound equipment as Monte Perkins of SYF spoke to the children about the importance of good behavior, positive attitudes and respect for each other and elders.

“We are here to offer support to the children,” said Perkins. “We want to be someone who can bridge the gap between parents, teachers and students.”

Perkins won the students’ attention by asking them questions concerning their upcoming assessments and quickly leading into the performance by Big Gen and Snipe.

Named the “Live Good Tour”, Big Gen and Snipe, with the help of Sound Squad Productions, travel and sing motivational songs about what it means to be a good person with a positive attitude.

The group video taped its performance for the students with the assistance of Tim White of Media Works Communications. Of the many venues the musicians perform, they stated that the Lowndes County and Montgomery school systems were among their favorites.

“There is not a platform we can‘t or haven‘t entered,” said Big Gen. “We get the largest and best response from the students of these two areas.”

Students jumped up, screamed and ran toward the artists to give them hugs as the excitement of the pep rally was too much to bear.

The artists finished out the afternoon with another round of high-fives and handshakes with students as they made their way from the gymnasium preparing to go home.

“It was clean,” replied student Devonta Murphy when asked what he thought of the performance.

Before the students exited the gym, both artists assured the children they would receive copies of their CD to help remember the performance from that day and the important messages touched on.

More information on the Live Good Tour can be found at www.livegoodtour.com.