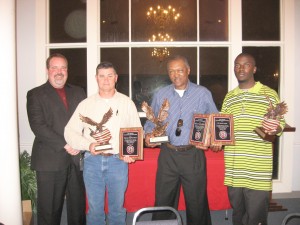 Ft. Deposit’s Volunteer Fire and Rescue Department held a banquet March 11 in honor of the hard work and dedicated service of all its members within the community and the surrounding areas.

Attendees were welcomed with prayer and treated to a meal provided by the Ft. Deposit Associated Grocery, Ft. Deposit Methodist Church and the Bethel Baptist Church.

Humorous stories, the fire department’s extensive history and compliments for the firemen were shared with the crowd for their effort in handling emergency calls.

The Ft. Deposit VFD received sufficient training last year to bring the town’s fire rating down from a nine to a seven and responded to 261 calls, far more than any other fire department in Lowndes County, according to Chief Eric Jackson.

“Each firefighter was awarded a plaque for their service in the community,” said Jackson. “We wanted to offer the community an opportunity to come out and tell the volunteers thank you.”

Board member Ren Heartsill spoke about the volunteers efforts and expressed how they stood on the shoulders of their predecessors.

To demonstrate how precious time is during an emergency, Department Chief Bob Hood and Captain Titus Axel suited up in their firefighting gear within two minutes.

Before closing the evening in prayer, awards were presented to three firefighters in observance of their outstanding service to the community.

The Wanda McCarty Award is presented to the fire department member who is recognized by  board members for keeping the facility and operations up to standards.

Board member Frieda Cross expressed that the firefighters have given the effort and taken enough pride in themselves and the community to be trained.