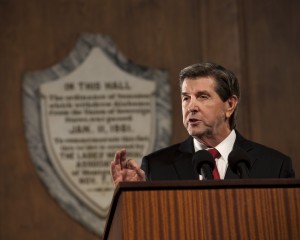 Gov. Bob Riley during his State of the State Address in January.

Ruling on Monday, Vance, who was appointed to the preside over the case by Chief Justice Sue Bell Cobb, said the Governor lacks authority to create his own prosecutor and must allow Attorney General Troy King to assume control of the state’s interests in the case. Riley appointed Tyson, Mobile’s District Attorney, to lead the illegal gambling task force on Jan. 25.

“The law of Alabama clearly gives the Governor the authority to delegate certain active and retired district attorneys to appear in cases anywhere in the state, but Judge Vance has invented an additional requirement that the Attorney General must give advance approval before they can participate in such cases,” said Riley. “That may be what Judge Vance thinks the law should be, but that is not what the law is. Judge Vance has clearly exceeded his authority in legislating from the bench.”

Attorney Joe Espy, who is representing White Hall, said Vance’s ruling was a “step forward in ensuring the people of Alabama and Lowndes County the constitutional protections they are due.”

“We fully expect Mr. Tyson to appeal this matter with their typical indifference and arrogance,” said Espy. “But there is no amount of arrogance that will undo the fact that we allow our judicial system to be operated under political officials who will replace the opinion of local law enforcement.”

White Hall Entertainment Center closed in early February. Espy told reporters then that owners did not want to put employees at risk of another task force raid, which happened in March 2009.