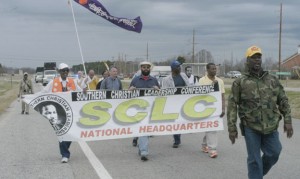 Marchers with the SCLC along U.S. Highway 80 last week.

Since the 1960s, Lowndes County has been at the forefront of civil-rights struggle. This week was no different as the nation marked the 45the anniversary of the Selma to Montgomery march.

The civil-rights struggle has been important issue which has contributed to the advancement of our nation and provided equal opportunities for individuals of all races.

Participants from all parts of the country are continuing that contribution by remembering the major sacrifices made in the 1960s.

In observance of that week in March of 1965, supporters from Los Angeles, Washington D.C., New York, Atlanta, Selma and Lowndes County marched along Highway 80.

“This has been an incredible opportunity to talk to people from all walks of life,” said Attorney General candidate Giles Perkins.

Just as in the 1960s, rain did not stop the marchers from accomplishing their primary goal of proceeding toward the capital in Montgomery.

The group pressed forward past the Interpretive Center in White Hall on Tuesday to stop at the Viola Liuzzo memorial and remember the contributions she made during that difficult time.

The memorial is a well known symbol in the fight against discrimination.

“Lowndes County played an important role during that time because most people who marched came from here,” said Samuel F. Mosteller, president of the Southern Christian Leadership Conference in Georgia. “The Interpretive Center has done an outstanding job of telling the civil-rights story.”

The march was highlighted by several Buddhist monks who walked along the historic route as marchers held their banners high and sang songs.