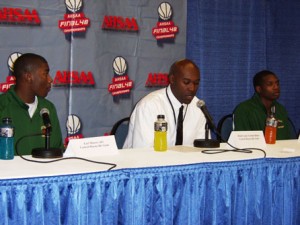 The Lions (16-16) advanced to the Final Four on Feb. 24 after securing their title as South Regional champions last Saturday against Choctaw County, but they couldn’t overcome Madison Academy in the first Birmingham showdown.

Screaming fans cheered to the sound of squeaking shoes finding their grip on a freshly polished floor as the two teams contended for possession the ball.

Antijuan Ball, a 6-foot-2 center for the Lions, showed tremendous effort keeping the ball from reaching the hands of Madison Academy with a total of eight rebounds in Wednesdays game.

He also led the team with 12 points.

The team utilized its quickness and taller players to keep the ball from being turned over to the Mustang, but as Madison Academy applied constant pressure to Central’s offense, the Lions “made shots that just would not fall,” said Baker.

Central lost some momentum in the second half as the Mustangs’ pace quickened in the third period and achieved a 63-36 win in the final.

Baker said he wants the feeling of the Lions returning to the Final Four to act as motivation to achieve victory in next season’s tournament.

“Coaches, parents and students all made sacrifices to help these boys get to the tournament. Now that we’re here, it will be easier for us to find our way back,” said Baker.