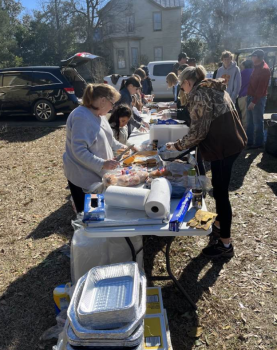 Imago Dei Church at the 45 served hot boxed lunches to Selma residents and volunteers after a tornado ravaged the community Thursday.

On Monday, the designated holiday for Martin Luther King Jr.'s birthday, Imago Dei Church at the 45 set up on the Selma street named for King, to cook another 600 meals for residents and volunteers with help from Lowndes Academy students as well as coaches, players, and cheerleaders from Central High School in Hayneville. 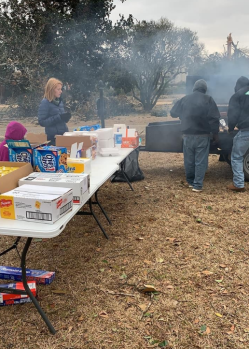 On Saturday, volunteers from Imago Dei Church at the 45 served hot meals at 500 Union Street in Selma, offering prayer to residents who were still without power on Saturday. 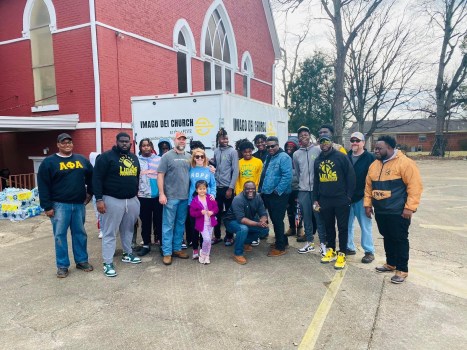 Coaches, athletes, and cheerleaders from Central High School in Hayneville joined Imago Dei Church at the 45 volunteers Monday, helping to serve 600 hot meals and distribute donated tools, clothing, and linens to storm-ravaged Selma residents and volunteers who came to help them. 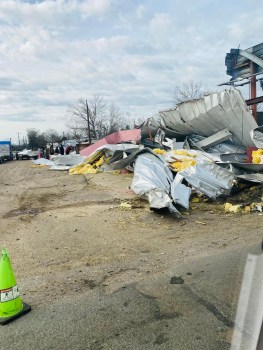 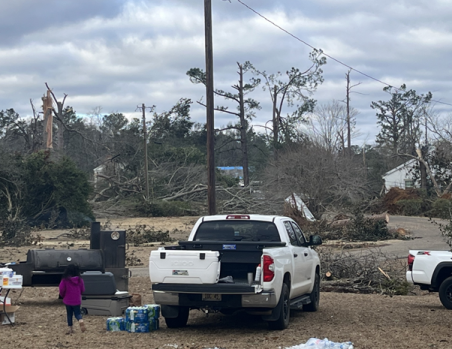 In the midst of downed trees and other debris, volunteers from Imago Dei Church at the 45 served hot lunches to volunteers and residents, many of whom were still without power on Sunday. 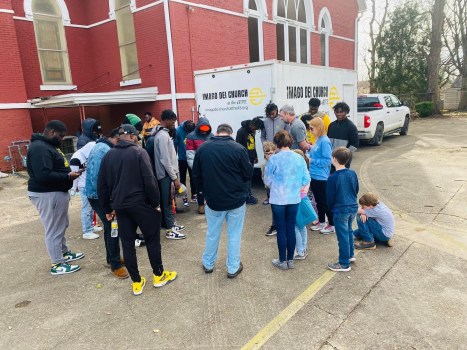 Volunteers from Central High School in Hayneville and Imago Dei Church at the 45 gathered to pray before working to serve residents and volunteers in Selma on Monday.

After tornados ravaged Selma on Thursday, volunteers from Imago Dei Church at the 45 in Hayneville sprang into action in the wake of devastation Friday, serving up hot, boxed lunches and offering prayer and comfort to hurting Selma communities.

In a social media post, Pastor Davey Lyon announced the church’s intent to provide aid and invited other congregations to partner in the effort.

“Selma was hit with a devastating tornado yesterday, damaging or destroying many homes and leaving most people in Selma without power…which means no ability to cook,” Lyon said. “Many volunteers have been pouring into Selma and working selflessly and tirelessly to help with the recovery. Needless to say, there were many today who could have used a hot meal.

“Imago Dei Church at the 45 had the privilege to be the hands and feet of Jesus by coming alongside those in Selma today and help ‘bear their burdens’ by cooking 180 hot meals and distributing them to many residents and volunteer workers. We thank God for those who came and helped serve and those who donated to purchase the food for today and tomorrow.”

Imago Dei Church is a church plant that seeks to plant gospel seeds and make disciples in its Jerusalen, reaching communities with the Gospel by meeting physical and spiritual needs.

According to Montgomery Baptist Association Director of Missions Neal Hughes, church planters like the Lyons seek to live out Jesus’ instructions in Matthew 25 by feeding the hungry, giving drink to the thirsty, clothing the naked, and caring for the sick and imprisoned with tangible resources and spiritual ministry.

“The Imago Dei Church at the 45, under the leadership of Pastor Davey Lyon, is a beautiful picture of the Matthew 25 instructions that Jesus gave all His disciples,” Hughes said. “Somehow when Davey and the Lord’s disciples at IDC minister in Jesus’ name to the ‘least of these,’ it is like they are ministering directly to our Lord.”

On Monday, the designated holiday for Martin Luther King Jr.’s birthday, the church set up again at the Selma street named for King and later at Westwood Baptist Church, to distribute cleaning supplies and linens and cook another 600 meals for residents and Samaritan’s Purse volunteers with help from Lowndes Academy students as well as coaches, players, and cheerleaders from Central High School in Hayneville.

According to Central’s Athletic Director, Brian Coleman, the experience impacted the volunteers as well as the people they served.

“This was one of the most eye- and heart-opening experiences of services not just for me but also for our student athletes and coaches,” Coleman said. “It is one thing to hear about and see on television, but there is nothing like seeing it with your own eyes and being able to touch and walk through the aftermath, [talk] to the people, and feel the hurt in their conversations.”

The Lyons and other IDC volunteers host monthly food distributions and community worship services while also volunteering in local schools.

“This Church family was birthed with such a spiritual DNA,” Hughes said. “They are the inspiration for every church to obey God’s great commandment and great commission.”

Lyon said he is grateful for churches and community partners like Alabama Ag Credit which partnered to help with the effort.

“It’s such a blessing to see the church come together in times like this,” Lyon said. Thanks to the willingness to serve and sacrifice [of partners and volunteers], God moved in [them] and through [them] to serve hot meals and some heartfelt prayers.”

Many people are still without power, Lyon noted, and there will be a great need to continue cooking for residents and volunteers and for helping in other ways in the days and weeks to come.

The church returned to help on Wednesday and plans to continue helping throughout the next few weeks and will post dates and locations on social media.

“If you or your church are interested in helping, please let us know and we will set dates and times,” Lyon said. “We hope to have a schedule in place by the end of the day [Monday] and will get that info out when we can.”

Individuals and groups interested in supporting the effort can donate at http://imagodeichurchatthe45.churchcenter.com/giving or mail a check to Imago Dei Church at the 45, P.O. Box 54, Lowndesboro, AL 36752.  All donations are tax deductible.  When using the donation link, please include an address and/or email to receive a tax donation statement at the end of the month.