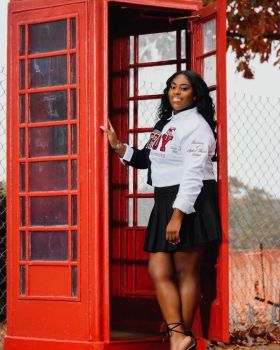 De’Andrea Truitt of Fort Deposit is the first in her family to graduate from college and was named to Troy University’s Provost’s List for the Fall Semester and Term 2 in recognition of her academic achievements. 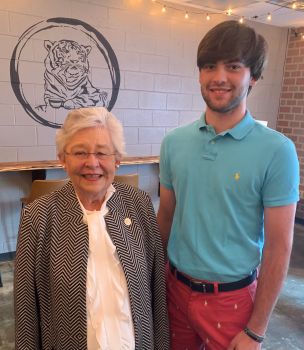 Greenville native Noah Lovvorn earned recognition for his academic achievements at Troy University, being named to the Provost’s List for the Fall Semester and Term 2 of the 2022-2023 academic year. Pictured are (left to right) Governor Kay Ivey and Lovvorn. 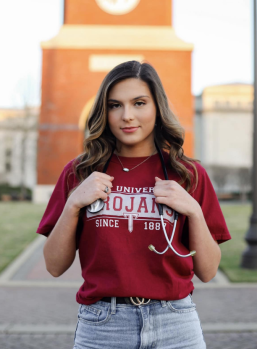 Lapine native Danielle Caffey achieved recognition on the Fall Semester Term 2 Provost‘s List at Troy University, where she is pursuing an Associate of Science Nursing Degree.

Troy University has released the names of 172 students named to the Provost’s and Chancellor’s Lists for the Fall Semester and Term 2 of the school’s 2022-2023 academic year.

Among those named were 13 Butler County natives, 26 from Crenshaw County, and 3 hailing from Lowndes County.

On Jan. 4, the university announced students to the school’s Chancellor’s List for the Fall Semester and Term 2. Those students were full-time undergraduate students registered for at least 12 semester hours and who earned a grade point average of 4.0. The list includes Fall Semester students at the Troy campus plus Term 2 students at TROY’s campuses in Dothan, Phenix City and Montgomery, along with locations outside of Alabama and online.

Fort Deposit native De’Andrea Truitt is the first in her family to graduate college, earning her Bachelor’s Degree in Nursing in December. That fact, coupled with her recognition on the Provost’s List, has meant the world to her mom, Debra Steiner.

“It was the best news in the world because De’Andrea is the first person in the family to graduate from college,” Steiner said. “It was more than an honor for me. Words cannot describe what I felt, what I feel. It was magical.”

Lapine resident Danielle Caffey is pursuing an Associates Degree in Nursing at Troy and was also named to the Provost’s Lists. Caffey said balancing college was challenging, but studying with friends helped her shoulder the load.

“Balancing school and work was the hardest part,” Caffey said. “I made a friend in one of my harder classes. We got in the groove and we studied together, so we both made really good grades.”

Greenville native Noah Lovvorn earned his place on the Provost’s List while pursuing a Bachelor’s Degree in Computer Science, specializing in cybercrime.

“He has made a sacrifice for some of his social engagements,” Lovvorn said. “He mentors at the student Christian center and he always makes time to get his studies done first, then deals with social life later to make sure he puts priorities first. We’ve always been proud of him and the way he takes responsibility on his own to do what needs to be done.”

Full-time undergraduate students earning the Provost’s List recognition achieved a grade point average of at least 3.65 in at least 12 semester hours to qualify for the honor. On Jan. 5, the school announced the list which included students in the Fall semester at the Troy campus as well as those enrolled in Term 2 at campuses in Dothan, Phenix City, and Montgomery along with locations outside of Alabama and online.