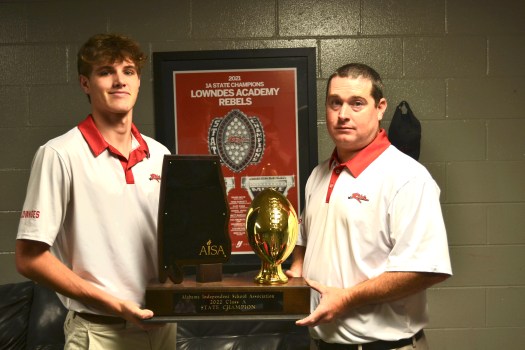 Lowndes Academy matched its 2021 success in Alabama Independent Schools Association Class A with a state championship run in 2022, where they defeated Jackson Academy, 24-8.

Rebels quarterback Clayton Hussey and head coach Shane Moye earned Player of the Year and Coach of the Year honors for their respective efforts.

“It was the first time in school history we’ve been able to win back-to-back state championships,’ Moye said. “It was exciting, and it was fun. It’s harder to, I guess, stay on top. There’s a lot more pressure that comes from the players’ standpoint and the coaches’ standpoint. Five years ago, when I took over this football job, I never would have thought this would be a possibility. We wanted to get to this, but we never knew it could happen.”

Moye said they were taking in every moment and memory so they could have it in their lives forever.

“It’s an honor to be Coach of the Year for anything because I know what hard work all coaches put into it, their programs, and their kids,” he said. “At the end of the day, Clayton says its about coaches, but we think it’s about the players. They put in the hard work. They’re committed, they’re coachable, and they do everything we ask them to do. They’re very talented, so I believe it’s the players that make us look good.”

He added his coaching staff does a great job of preparing the team.

“They all do a great job helping me be successful,” Moye said. “This is really an award for them as well.”

Moye said the atmosphere at the school surrounding the football season was awesome.

“The school spirit, just walking into school at the first of the year, was so much different,” he said. “Football kind of sets the tone for the entire school year, and just from the first day on, people were excited. People were talking about it. ‘Can you go back-to-back?’ That makes it harder because now people are expecting it. The year before that, no one’s expecting us to do that.”

With a target on their backs, Moye said the games became tougher this season. He noted the 21-20 victory over Crenshaw Christian Academy was the team’s biggest obstacle.

“We were playing well; we just could not score,” Moye said. “At that moment, it was 20-7 to start the fourth quarter, and we were starting to worry. The kids were frustrated.”

After sitting his players down and encouraging them, his kids responded and delivered the victory.
“That game was the toughest one of the year,” Moye said. “We played some other games … that were big-time for the school, but that Crenshaw game was to win the region and host in the playoffs. It was on the road for us. That was the biggest one for us.”

Moye said Hussey, whose offensive contributions included 20 passing touchdowns and nine rushing touchdowns, played a key role in the team’s success on defense, where he led the team with nine interceptions.

“He’s a playmaker,” Moye said. “He’s a good kid. He comes from a good family, and he does everything we ask him to do on both sides of the ball. Three years ago, he wasn’t even allowed to play football because he had some concussion issues, so to be able to be here and to be able to have the season he had, it’s basically all for the glory of God.”

Hussey said his defensive numbers didn’t ramp up until the team made an adjustment to where he played, moving him from cornerback to linebacker and eventually to a safety position.

“That’s all my coach,” Hussey said. “He just found a better spot for me to play and put me in a better spot.”

He added on offense, he was nervous until about midway through the season, but he adjusted to the role.

Hussey missed one game as a precaution due to a shoulder injury, but he returned to lead the team to a championship.

The Trifecta Tri-County Team Selection Committee chose the following 10 players as its best in Lowndes County for the 2022 high school football season: