The Calhoun School varsity football team started its season with a 26-8 victory over Class 2A Barbour County on Friday night for its first season-opening triumph in 17 years.

For Tigers head coach Ervin Starr, the win marked the first attained on the gridiron for the program since Oct. 24, 2014, when Calhoun defeated Central Hayneville, 24-16. The Alabama High School Athletic Association awarded Calhoun a victory in 2019 after the association stripped Highland Home of six victories for using an ineligible player.

Starr said while he was glad to take the Highland Home win because it stopped the losing streak, he told his players he didn’t want to count it until the team won one on the field.

“It was an unbelievable feeling,” Starr said of Friday’s outcome. “I won a state championship in basketball here, and it felt almost the same because it’s been a long time coming. I was just happy for our kids, especially our seniors. And I hate it for our seniors prior to (this season) that came through and never got a win.”

The Tigers racked up 312 yards of offense against the Jaguars. Freshman athlete Jeremy “Bo” Hardy led the team with 156 yards rushing on 15 carries and a pair of touchdowns, while senior athlete Adrian Moorer went 6-of-14 passing for 53 yards and scored on a passing and rushing touchdown.

“I give it all up to the young offensive line because our offensive line only has one senior on it and our starting center is an eighth-grader,” Starr said. “Then, we have two other freshmen and a junior mixed in. They did a great job by allowing him (Hardy) and our other quarterback (Moorer) to make runs, sit in the pocket, and throw the ball.”

“He’s 6-(foot)-3, 180 pounds,” Starr said. “What if he had been playing for four years? We wouldn’t be talking about this right now. We’d probably have a victory sooner if we had kids coming out and playing like that.”

Hardy, who also had an interception while playing defense, said it was a great feeling to earn the win, but added there’s always room for improvement.

“We’ve still got some things we can work on and be better,” he said. “As players, we can grind and be better.”

He added another area where he personally could improve is to work on his passing, so he doesn’t have to run as often and he can minimize the chances for injuries.

Starr said an area where the team can improve is cutting down on delay of game penalties in what was an otherwise clean game for his squad.

“I’ve got a roster full of ninth-graders,” he said. “They don’t move as fast mentally right now. We won’t have eight penalties like that again. We didn’t have any personal foul penalties or any unnecessary roughness penalties … Discipline-wise, they’re great at that. We’ve just got to speed it up as far as not getting those delays of game.”

Calhoun Principal Nicholas Townsend said the win builds on a changing atmosphere within the school as Starr works to change the narrative of Calhoun being merely a basketball school.

“I think that atmosphere was set last spring, seeing all those kids come over from middle school to train, weight lift, and work out throughout the summer and throughout the start of this school year,” Townsend said. “It was just a different air, a different feeling about this football season.”

Starr said he wants to change the perspectives of others who might view their football program as an easy victory on the schedule.

“That’s what we were for the last few years – everybody’s Homecoming,” he said. “It didn’t matter if it was the second game of the year or whatever; if you’re playing Calhoun, put them on Homecoming because you know it’s going to be an easy win.”

From his interactions with the community, Starr said people are recognizing what the future may hold for this team featuring 16 freshmen.

“We’ve got talent,” he said. “We’re young, but we’re very talented. I think everybody in the community knows it … The word has gotten around that we’ve got some young, talented kids at Calhoun that are going to be very special.”

Starr said he gave his players 24 hours to enjoy the win, but after that, it’s time to get back to work and build towards the next one.

“Sunday morning when they wake up, I’m glad they enjoyed the weekend and enjoyed the win, but now we’ve got to get ready for Billingsley …” Starr said. “This is the first region game. Every game is important, but when you look at it like this, the next game is the most important. Our guys know we’ve got to be in the top four teams in the region to make the playoffs, but we’re still going to take it one week at a time.”

The Tigers host the Bears on Friday night at 7 at Samuel Bruce Stadium. 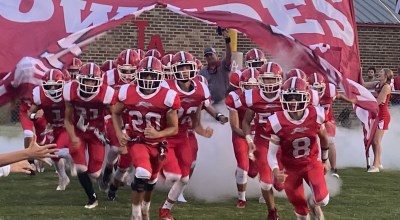