Sunday, April 24, marked the 10th Annual Wild Game Supper held at the Hayneville Baptist Church, in Lowndes County. Folks from all over the county came out for the event looking to enjoy the great food and maybe even try a few for the first time.

Judge Adrian Johnson said there was a really good turnout, with over 100 people in attendance this year.

The supper was held at the church to help spread the Christian message. They share their message of love and peace while enjoying great food with the people of the community.

This year, they had fried wild turkey, duck, deer and various kinds of fish. They also had wild hog, sandhill crane and fried quail. A couple of the deer hunters even made their own sausage for people to sample. 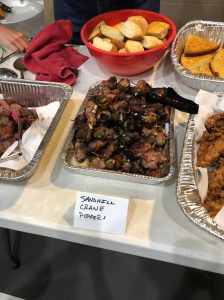 “We cook everything right there at the church,” Johnson said. “We have all the fryers and things we need right here. The men get there about two or three in the afternoon and start cooking. It’s a chance for the men of the church to get together and enjoy some Christian fellowship and friendship.”

With the large crowd this year, Johnson said he was worried they wouldn’t have enough food, but there was plenty with all the side dishes added in. 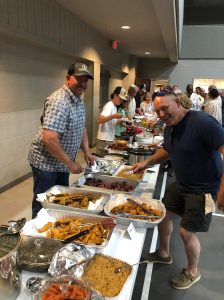 Then came the desert table. Johnson said, “Diane Knight makes a really good mandarin orange cake. Everyone enjoyed that. There were Mississippi mud cakes, pies and all types of cookies. There was plenty of sweet treats for everyone.”

J.R. Aughtman made his famous biscuits. People like to watch him do it, but few have mastered his mother’s recipe or his technique.

One recipe someone was able to replicate was the Chick-Fil-A chicken nuggets made with turkey meat.

“It tastes just like eating a Chick-Fil-A nugget. It is outstanding! Everybody loved it. It went quick,” Johnson said.

This year’s guest speaker was 21-year-old Tyler Smith from Selma. He is a professional bass angler and a Toyota Series Open Pro fisherman. He has two top 10’s and one tournament win to his credit.

Johnson said, “We had a really good message from Tyler. He talked about how he’s relied on God to guide him and put him in the position he’s in.” Johnson went on to talk about Tyler’s strength and his ability to witness to the people.  He said it was a really good testimony, especially for all the young people that attended this year.

Johnson added that the Hayneville Baptist Church raised $500 for the purchase of door prizes for the first five people.

“We gave out rods and reels, a tackle box, all sorts of stuff,” he said.

Next year, in February instead of April, the keynote speaker will be Hank Parker. Hank has been a pro-fisherman and celebrity for over 30 years. A native of North Carolina, he might be recognized from his television show ‘Hank Parker’s Outdoor Magazine,’ which airs on the Outdoor Channel and the World Fishing Network. Another show that you may have heard of, is ‘On the Water with Hank Parker.’ It airs on both the Sportsman and Pursuit Channels.

Hank Parker began his professional fishing career in 1976, when he began fishing the National Bass Association Tournament circuit. He won his first season. Parker went on to win the Bassmaster’s Classic in 1979 and 1989. Check out his website, www.HankParker.com. There, you can find hints, techniques and just about all things fishing. You can even sign up for his free newsletter.