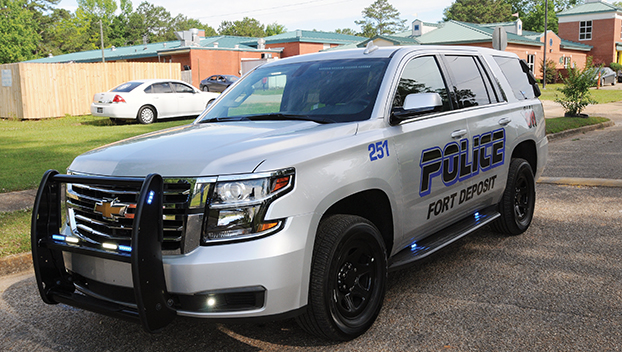 If you are riding the streets of Fort Deposit, you can’t help but notice the police department’s newest vehicles on patrol.

According to Police Chief Terry Steiner, the town obtained the vehicles with the help of a grant.

“We got three new units,” Steiner said. “We purchased two Chevy Tahoes and a Dodge Ram 1500. The vehicles were replacing ones from an aging fleet. We currently have the new vehicles plus and older Tahoe, three old Dodges and a Ford Crown Victoria.”

In addition to the vehicles, the Fort Deposit Police Department will be getting some new equipment in the near future.

“We’ve been awarded some grant money that will get us some new vests and Tasers,” Steiner said. “The vehicles and equipment are important because of the work we do in town and on the interstate. With more development coming along the interstate, we may need to add officers.”

Currently Fort Deposit has four police officers including Chief Steiner. The chief says he’s working to hire three more officers. He said having enough patrol vehicles that don’t have the problems that come with aging vehicles is a benefit to the Town of Fort Deposit.

“I think it’s great for the city,” Steiner concluded. “We’ve had a good response from the citizens when they see them. The whole town is excited about them.”