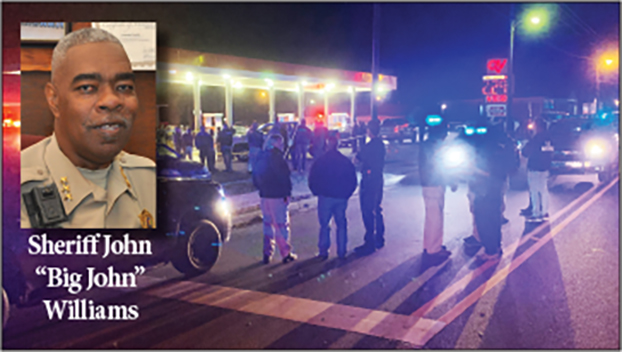 Investigators from numerous agencies are on the scene of a fatal shooting at the QV gas station across from the Lowndes County Courthouse in Downtown Hayneville.

The shooting occurred just after 8 p.m. tonight, Saturday, Nov. 23, killing Lowndes County Sheriff John “Big John” Williams, who had been involved in law enforcement for more than 40 years, first volunteering as a reserve deputy in 1978.

News of Williams’ death traveled fast around the state.

“I’m saddened to hear about Sheriff Big John Williams, who was tragically killed this evening in the line of duty,” Gov. Kay Ivey said in a release Saturday night. “Through his service to our country in the United States Marine Corps and his many years working in law enforcement, he dedicated his life to keeping other people safe. He will be remembered as a consummate professional and pillar of his community. I offer my prayers and deepest sympathies to his family and to the men and women of the Lowndes County Sheriff’s Department.”

“Tonight, Alabama mourns the loss of Lowndes County Sheriff “Big John” Williams, who was killed in the line of duty,” he said. “Sheriff Williams dedicated over 40 years of his life to public safety, including 19 years as Sheriff. Please pray for his family and fellow officers.”

Details of the shooting have not been released, however, numerous law enforcement sources have reported that Williams was responding to a call at the convenience store in Hayneville when he was shot.

There is currently a heavy presence of state troopers with the Alabama Law Enforcement Agency in Lowndes County assisting the sheriff’s office.

UPDATE: The State of Alabama has issued an Emergency BLUE Alert. The Lowndes County Sheriff’s Department and the Alabama Law Enforcement Agency are asking for the public’s assistance in locating 18-year-old William Chase Johnson, a white male with brown hair, who is 5-foot-9, 137 pounds. Johnson may be traveling on foot and is believed to be a serious risk to the public. Johnson was last seen around 8:15 a.m. at the QV gas station in Lowndes County on Nov. 23, 2019, the scene of the fatal shooting of Lowndes County Sheriff John “Big John” Williams. If you have any information regarding Johnson, please contact the Lowndes County Sheriff’s Office at (334) 548-2222 or call 911.
A Blue Alert is activated when a local, state or federal law enforcement officer in Alabama has been killed or seriously injured and the perpetrator is at large.

More information will be provided as it is made available. 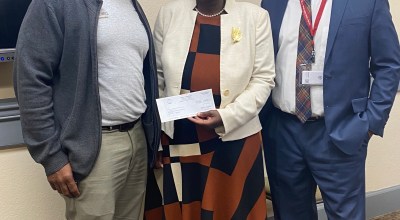