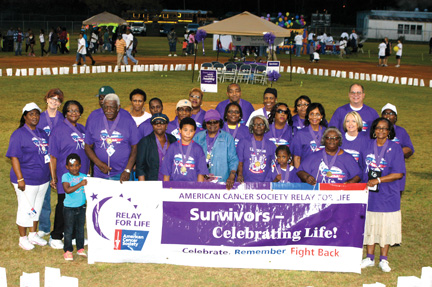 Cancer survivors pose behind a banner following their “victory lap” at Friday night’s Relay for Life in Hayneville.

The Lowndes County Relay for Life exceeded its goal of $35,000.

According to Event Co-chairman Zandra Colston, as of Tuesday, April 24, “Carnavaling for a Cure” held at the Russell Baseball Complex in Hayneville has a gross fundraising total of $38,000.

Hayneville Mayor Helenor Bell brought greeting on behalf of herself and the five-member Hayneville Town Council.

“Thank you so much for coming out to this occasion. You know Relay for Life has played a very important part in all of our lives,” she said. “If we don’t have someone in our most immediate family that has experienced cancer, we all know someone that has experienced this.”

“It’s really great to be able to sponsor this kind of event,” said Tom Tsekoouras, site general manager for SABIC in Lowndes County, who said that his company has been a part of the community for 25 years and celebrating 25 years of operation. “It’s a great community event where we come together to support a very worthy cause, the Relay for Life And we’re just very proud to be the gold sponsor.”

Cassandra Washington, who was diagnosed with breast cancer in 2009, gave a tearful testimony.

Cancer survivors who were present to walk the victory lap ranged from five-month to as many as 24 and 40 years. While they took their lap with a big crowd and Hayneville Middle School cheerleaders cheering them on the song “Happy Birthday To Ya” blasted from the sound system.

The following is a list of survivors (may be incomplete) who participated in this year’s Lowndes County Relay for Life:

By Fred Guarino The Lowndes Signal There appears to be no current investigation into absentee ballots cast in Lowndes County’s... read more