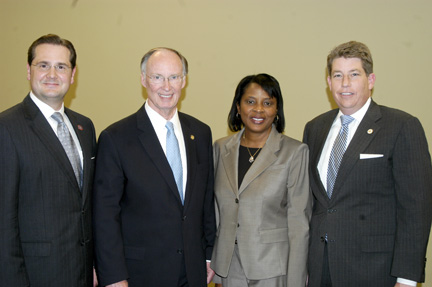 Hayneville Mayor Helenor Bell, second from right, with from left, Christopher Masingill, federal co-chairman of the Delta Regional Authority, Governor Robert Bentley and Jim Byard Jr., director of the Alabama Department of Economic and Community Affairs, were all on hand Monday for the announcement of free medical care being offered May 1-10 in Hayneville, Demopolis, Pickensville (two days only) and Selma through the Innovative Readiness Training Program.

More than 5,000 residents of Demopolis, Hayneville, Pickensville and Selma will receive free medical, dental, optometry and counseling services May 1-10.

The IRT program, under the office of the Assistant Secretary of Defense for Reserve Affairs, focuses on reserve components of the military to provide in the field medical training.

Instead of just going to a unit and doing paperwork “and pretending you’re working on patients,” Arends said, “We provide an environment where they’re actually going into the community where they gain valuable training in terms of potentially responding to disasters.”

He said IRT trains military personnel to “get on a plane and get down to some place and be able to set up a clinic in potentially a fire bay, or small town hall or an abandoned clinic or a factory in Demopolis or some building in downtown Selma.”

The free services, regardless of income, will be offered from 8 a .m. to 7 p.m. every day at Hayneville Town Hall.

“We’ll also be doing some civil engineering projects. We’re going to resume our civil engineer project on the city utilities (in Hayneville), the sewage system here in town,” Arends said. He also said a mechanic they brought in would work on the city’s pool of vehicles.

He said there would be about 250 military personnel involved from all states, including the Army, Navy, Air Force and the reserve components of each.

He also said there would be a mobile team going to Pickensville for two days to offer the same services.

Arends said there would be 90 personnel in Selma and Demopolis and 70 in Hayneville.

“This is big for Hayneville,” said Bell. “This means free healthcare, free eyeglasses. This means repairs to our water system and sewer system, and we are grateful for the partnership we have with these people.”

She also this assistance through the IRT Program would save the town thousands of dollars.

“I just want to stress how important this program is not only for the Delta Region but for Alabama,” Masingill said. “Without healthy people you won’t have a healthy workforce, and that is a key ingredient to strong economic development.”

Bentley thanked the Delta Regional Authority and the Department of Defense for helping some of the “finest places in world.”

He said, “I know this is going to do a lot of good, and you are going to see a lot of patients.”

The governor said, “I’m tired of Alabama having one of the highest infant mortality rates in the country.”

He also said he was tired of Alabama’s status as being nearly the most obese state in the country.

“And that results in diabetes, adult onset diabetes. It results in heart disease and so many other issues that are related to that. So, I would like to see Alabama get healthy. And you being here (the IRT Program) helps us do that,” he said.

Cancer survivors pose behind a banner following their “victory lap” at Friday night’s Relay for Life in Hayneville. By Fred... read more