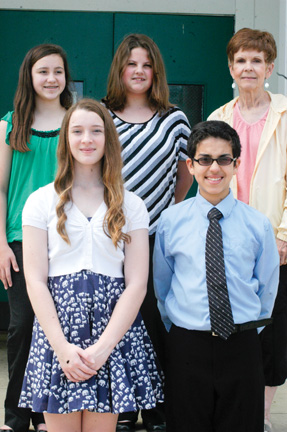 Who would have thought that knowing about Elmo, Nerf, Lego and Fijit Friends would help you be successful at anything in school?

The event was held at Morgan Academy in Selma and represented something of payback for the Lowndes Academy youngsters, according to eighth grader Nassim Touil.

“It was very exciting. At first it was nerve racking against Morgan. We went up against them last year, and they beat us really bad. And this year we came back and beat them,” Touil said.

“We’ve been working every day since what, December… January,” said Williams. “They’ve given up their PE time to come and practice every day.”

Williams said this was only the second year Lowndes Academy entered the middle school competition and their first win. “I’m so excited I could just die,” she said.

Motes said, “I’m happy that we won. I was nervous at first, but once we got into the competition, it was better.”

Callaway said, “Well, I guess I was nervous because this being my first year, but after we sat down everything got kind of more quite.”

Foley said, “It was a little bit nerve racking because it me and Dakota’s fist year, but I’m happy that we won.”

According to the team, the questions were about random information. And one question for bonus points included 2012 top toys, which were Elmo, Nerf, Lego and Fijit Friends.