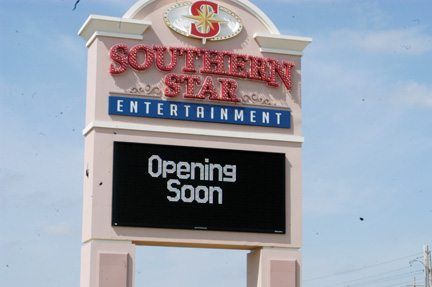 “We know that there was a sign. No one has apprised the commission or economic development department as of yet of what their intentions are,” Gene Crum, Lowndes County Economic Director said Wednesday. “But based on the some of the things that have transpired earlier in the day with the acquittals, etc. of Milton McGregor and a number of other legislators there is nothing as we know to date at this time that would prohibit them from going into operation.”

Crum said no one has come to the commission to say which date they are likely engage in operation.

“As long as they acquire a business license, as long as the attorney general does not issue a stay or anything of hat nature it appears that they can go ahead an engage in operation,” Crum said.

White Hall Mayor Elizabeth Davis said she received a call from a Mr. Leslie Clark that said “they were going to reopen and wanted to do if I had a problem with it.” She said, “I didn’t.”

Calls to County Commission Chairman Charlie King Jr. and attempts to contact W.H.E.A.T. Charity were not returned as of press time.

A mobile home was overturned and damaged by Friday’s storms. Special to the Signal About $500,000 in damages to property... read more