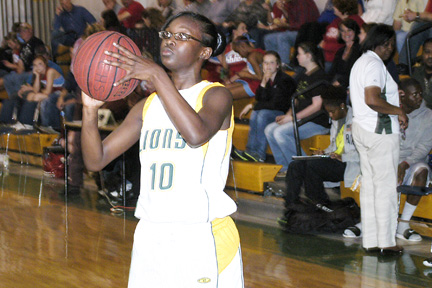 The Central High School Lady Lions of Hayneville and Lady Bobcats of R.C. Hatch High School in Uniontown battled to what proved to be a disappointing end to the Central’s season 57-53 in Montgomery on Wednesday night.

The Lady Lions 17-8 fell to the Lady Bobcats 15-9 in the Class 2A Central Regional held at the Dunn-Oliver Acadrone.

Central Coach Trent Woodley said his team was hurt by a couple of errors, bad shot selection and turnovers. But he said, “Other than that we were in the game.”

He said he thought his players did well, “But we missed one too many free throws.”
Woodley said he only loses one senior from this year’s squad, and everyone else will be back. “That’s real good sign for next year,” he said.

While the Lady Lions won their area and a sub-regional match, Woodley said he “wanted to go further.”

The Lady Lions and Lady Bobcats fought to 1-point margins in the first and second periods to set up an exciting second half.

The Lady Lions pulled out to an 8 point lead in the third period, but the lead was 41-37 and the end of that period.

Kendreuna McPherson and LaBrittany McCall each picked up their fourth personal fouls with about seven minutes left in the game for the Lady Lions, and the Lady Bobcats closed the lead to 44-42 with 5:26 left in the contest.

Abraham took the Lady Bobcats on her back and scored four straight points and a free throw to put the bobcats up 52-46 with 2:25 left. And senior Erica Martin fouled out for the Lady Lions.

Central’s McPherson stepped up to help cut the Bobcat lead to 49-53 with 1:54 left in the game. And with 13.2 ticks left on the clock thanks to McPherson, the Lions trailed 53-56 with a fighting chance to pull this one out. But McPherson also fouled out.

The Lady Lions season ended with a tied up ball at the buzzer 57-53.