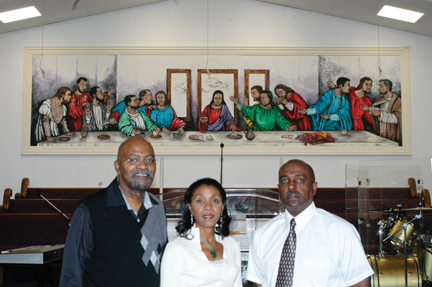 “It is imperative that everything is represented, the mural, the church, the sacrifice of the people and the great work that God has done.”

Those were the words of Bennie Stanford, pastor of Bethlehem Christian Church in Fort Deposit, concerning the newly constructed “debt free” church building with its impressive 20-foot by 10-foot mural of The Last Supper.

The church held its consecration service on Sunday, Dec. 11.

“The glory goes to God that he took common ordinary people with Social Security, welfare, minimum wage jobs and some professionals and was able to build a church like this,” said Stanford of the new church building on Gilmer Road. “It’s a testimony to what God has done.”

William Ozier, the artist who painted the mural, also designed the new church building, which actually incorporates the old church structure inside itself. Ozier’s wife, Orbuty, served as the project manager for the church.

Orbuty is co-owner of W.C. Kirsch/O&W General Contractors registered in Hayneville, which built the church. William, a designer/planner, says he was a child prodigy in art and puts a mural in the churches he designs. However, he said this was his first in Alabama.

For the church mural in Fort Deposit, William said he created his interpretation of Leonardo da Vinci’s Last Supper including a representation of blacks, whites, Hispanics and various nationalities.

“I used his (da Vinci’s) painting, which has been copied all over the world. So this is my version of his painting,” William said.

He said the mural took him about a month to create. It is painted with acrylics over a canvas- appearing texture of plaster created by Orbuty.

Stanford said that February of 2011, “God gave me a revelation to build the church structure debt free.

The church began to raise money for the project and working with the contractor. In August of 2011 we began to build it. And the structure of the building is actually debt free.”

He said some of the parking lots and furniture were financed with a loan.

“But we find it very rewarding. And we are thankful to God that we were actually able to build this building debt free,” Stanford said. “And we think that is very significant in this area. Because what God was trying to reveal to us is to teach people that credit is not the only way.”

He said the mural adds the finishing touches to what he believes is the splendor that God has brought.

“What it does is it brings in the focus of what we believe and that is Jesus Christ and the Apostles’ doctrine,” Stanford said.

By Fred Guarino The Lowndes Signal Spring Break could come after the state high school exit exam and students and... read more