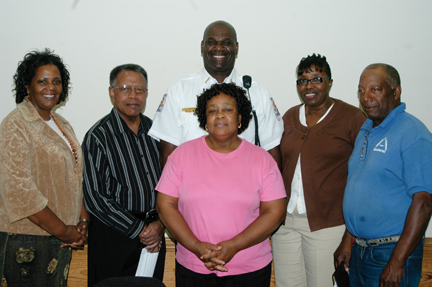 The White Hall Town Council introduced its new part-time police chief last Thursday night and learned of a house-to-house survey to be conducted in White Hall this month to help create a master plan to solve the raw sewage problem of Lowndes County.

In addition to introducing its new police chief, the council announced approval of its 2012 fiscal year budget, approved a borrowing resolution with First Citizens Bank and a memorandum of agreement with the Alabama Center for Federal Enterprise CDC Inc. (ACRE) which has hired surveyors to conduct a survey of Lowndes County, including White Hall, septic systems beginning Oct. 15.

Tony M. Bufford hails from Pensacola, Fla. and previously served as Police Chief of Marion in Perry County. He said he will be serving in the capacity of police chief for the White Hall Police Department on a part-time basis.

Mayor Elizabeth Davis announced that a projected budget of approximately $3 million was approved during a special called meeting held in September.

The council unanimously approved the minutes of its previous meeting and a borrowing resolution authorizing the mayor to borrow funds from First Citizens Bank to pay the Lowndes County Water Authority, United States Department of Agriculture and First Citizens Bank with the franchise tax used to secure the loan. Also, borrowing would be subject to further council approval.

However, she said, the issue is not just raw sewage, but that septic tanks more than 15 years of age are not compliant with current regulations.

Flowers said the state Health Department has estimated that as much as 80 percent of the county does not have functioning septic systems.

With the grant, she said, five surveyors from county commission districts have been hired to do a house-to-house survey of Lowndes County. The surveyor for the district of White Hall will be Ruby Rudolph.

She said the survey would be helpful because some officials think the census of Lowndes County is wrong. She said with the data, wastewater experts would be brought in to see where people are settled and what places need (sewer) systems.

She also recommended that White Hall amend its Water Authority to make it a water and sewer authority because funds are available which must go through a sewer entity. She also said a cooperative agreement with ACRE is necessary to share information with the town including updated E911 data.

Flowers stressed, “They (Health Department, Environmental Protection Agency and other government officials) are not going to use this data against people.”

She said, “We’ve agreed that any data we share with them will not be identifying data.”

Council member Moses A. Bandy announced that the public safety fish fry will be held on Saturday Oct. 15 about 12 noon on the grounds of Town Hall.

Davis said the fire truck is being repaired. And Bandy pointed out the need for a restriping of Freedom Road.

Keldrick Exford (3) who scored the first touchdown of the night for Calhoun on the way to a 28-18 homecoming... read more