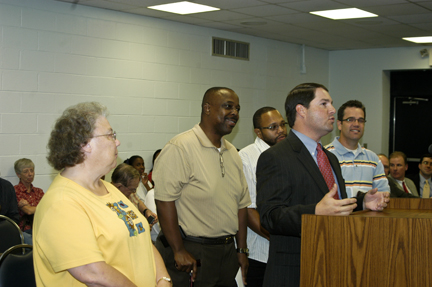 Lowndes County District Judge Adrian Johnson introduces local pastors and Sister Rosemary Fonck to the Lowndes County Commission. The group, which appeared before the commission Monday night, are participating in Operation Inasmuch based on Matthew 25:40 from the Bible, "Inasmuch as ye have done it unto one of the least of these my brethren, ye have done it un to me." On Oct. 22 from left Sister Fonck, the Rev. Sylvester Hardy, the Rev. Franklin Nettles, the Rev. Darrell Paulk and members of their churches will assist 18 Lowndes County senior citizens with work on their homes from repairs to yard work.

The Lowndes County Commission took a “business friendly” step Monday night in approving tax abatement for Hyundai on a piece of equipment to be used at the Daehan plant in Lowndes County.

The commission also voted to hire an economic developer over the objection of two commissioners.

Warren C. Matthews of Burr-Forman appeared before the commission on behalf of Hyundai to explain a tax abatement request.

He explained that the tax abatement sought is for a $2.9 million piece of tooling equipment to be owned by Hyundai but used at the Daehan Solutions plant in Lowndes County to make parts for a new car model line.

He said that the abatement sought is “one time” for sales and use tax, about $43,500, but the non-educational property tax abatement would extend for a maximum of 10 years.

Commissioners unanimously approved the request pending provision of serial numbers, model numbers and date of sale are provided to the commission through economic developer Gene Crum.

While the commissioners delayed action on a fiscal year 2012 budget, the commission approved a $65,000 contract with Southeastern Economic and Community Development to hire an economic developer.

Commissioner Dickson Farrior asked that the employment of an economic developer for the county be delayed until after the budget is approved.

However, on a motion by Commissioner Robert Harris, seconded by Commissioner Marzett Thomas, the commission approved the contract to hire Gene Crum as economic developer for the county.

The motion carried three to two with Commission Chairman Charlie King Jr., Harris and Thomas in favor and Farrior and Joseph Barganier voting no.

Farrior said the commission should put a hold on any expenses “until we get a hold on where we are.”

He wanted it on the record that his position is based on the fact the tax revenue needed was not in hand.

Following the meeting Barganier said, “We are going to have a tough time making payroll. We need a boom cutter. As tight as things are, we should not be spending money in other places.”

Barganier defended the tax abatement to Hyundai saying that the abatement is a small amount compared to what the county has invested in the industrial park.

Farrior said for the county not to have approved the abatement would not have been “business friendly.”

Under the consent agenda the commission unanimously approved a resolution for GASB54, which is a new way to report financial statements beginning this year and a $300 appropriation for Citizens United for Action.

Lowndes County District Court Judge Adrian Johnson appeared before the commission to introduce a ministry by various pastors and various churches in the county to meet the needs of citizens in the county.

Johnson said while personal donations from commissioners would be accepted, he was asking for their support by joining in if possible, but not money.

He said 18 senior citizens were identified who need help with their residences from repairs to yard work.

Appearing with Johnson were the Rev. Darrell Paulk, the Rev. Sylvester Hardy, the Rev. Franklin Nettles and Sister Rosemary Fonck.

The commission recessed its meeting until Wednesday night, Sept. 28 at 6 p.m.