Will Stone Store to be donated to Lowndesboro 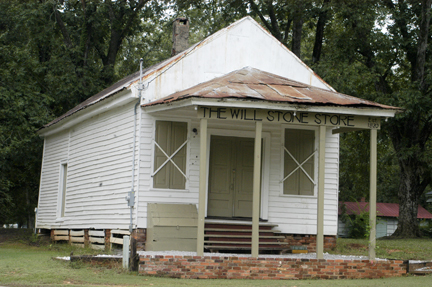 The public is invited to a special dedication ceremony Monday, Sept. 26 at 5:30 p.m. in Lowndesboro.

At 5:30 p.m. on Monday, the last standing building of the old business district left in Lowndesboro will become property of the foundation. Reg and Lila Dryer will donate the historic store, which was established in 1820.

The public is invited to the special dedication ceremony to be held at the store on Broad Street directly across from the Lowndesboro town post office.

The ceremony is scheduled to include an invocation by the Rev. Gary Burton, past president of the Alabama Historical Association, the donation and deeding by Lila and Reg Dryer and acceptance by Taylor, president of the Lowndesboro Landmarks Foundation. There are also scheduled remarks from Lowndes county Commissioner Robert Harris, Lowndesboro Mayor Rick Pate and Taylor.

Reg Dryer said he bought a house in Lowndesboro 25 years ago and purchased the store along with it.

“I didn’t really have a reason to buy it (the store), but thought it was a pretty good idea at the time,” he said.

He said he always wanted to do something with the historic old store.

“If they can put it to use and make it into something like a welcome center or a museum or library,” he said he thought that would be a good thing.

He said, “It will turn around and become something better than it is now.”

Taylor said the old store is “the only standing building which was part of old Lowndesboro business district.”

“In 1927 a large fire destroyed the rest of the old business district which was across the street. The old store building has been used mostly as a business enterprise, reportedly going back to a time when it was used as an Indian trading post in the 1820’s,” he said. “The history of the building is presently being studied in detail and doubtless new facts about its history will be reviled.”

Taylor said, “It is the Dryers’ desire that this building be available for the community to enjoy and appreciate for generations to come. Landmarks Foundation takes this responsibility with humility and sincerity. It is Landmarks intention to maintain the historical antiquity of the structure and make it a continuing part of the Lowndesboro experience.

“A fund has been set up by the Landmarks Foundation where any donations can be directed toward the preservation of this property.”