Glenwood Gators get best of Rebels 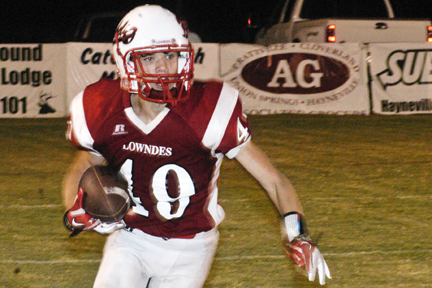 The Lowndes Academy Rebels' Garrett Nall fields a kick off.

The run through for the 1A Lowndes Academy Rebels brought smiles to fans’ faces proclaiming “Choot ‘Em Rebels” as in the popular TV program “Swamp People.”

But the 54-0 loss at home in Hayneville at the hands of the 3A Glenwood Academy Gators, Friday night, was nothing to laugh at.

“They were tough, but we helped them a little bit,” said Rebels’ head football coach Art Sullivan, who was not laughing. “We didn’t get no effort out of our guys. We didn’t come to play… Our guys were intimidated by them.”

The Rebels slowed the Gators down holding them to a 1-yard TD run by Brandon Daley at the 8:27 mark of the third quarter and a 4-yard run by Dalton Drew at the 11:00 mark of the fourth.

The Gators earned 20 first downs to nine for the Rebels, put up 373 yards rushing and 45 yards passing for 418 yards of total offense.

The Rebels rushed for 56 yards including 42 by Toby King, 13 by Garrett Headley and 1 by Hank McIntosh.

McIntosh was 12 of 21 passing for 73 yards for a total offensive production by the Rebels of 115 yards.

Next up for the Rebels is South Montgomery on the road.