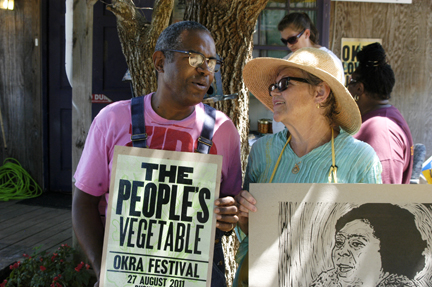 Amos Paul Kennedy of Gordo, Ala., an internationally known poster artist, left, presents his latest work, a poster for the annual Okra Festival in Burkville to Barbra Evans, one of the founders of the event held Saturday. Evans also holds a sample of other art on display at the event.

But the Okra Festival, which has been held for past 11 years in the tiny Lowndes County community, could be called “the people’s party.”

The annual festival poster is a work of art, created by internationally known printing press artist Amos Paul Kennedy of Gordo, Ala. and Kennedy Prints. He was recently honored by the University of Alabama and led a print workshop as part of the Faculty-In-Residence Program. He was also featured in a documentary called “Proceed and Be Bold,” according to Okra Festival co-founder Barbara Evans.

Kennedy makes a poster for the event each year, said Evans, copies of which can be purchased by festivalgoers.

The best part of the Okra Festival, however, is that people of all colors and races come to enjoy being together in love, said Evans.

Vendors, who sold everything from fresh okra, pickled okra and pig ear sandwiches to quilts, were asked to make a donation to the Blackbelt Community Foundation.

The event was sponsored by the Blackbelt Community Foundation and Lowndes County Commissioners Dickson Farrior and Joseph Barganier.

This year’s poster by Kennedy features a drawing in green of an okra plant in the background with black letters over a lighter green background proclaiming “The People’s Vegetable, Okra Festival, 27, August 2011.”

She said, “Everything else had burned up except the okra. So, we called it the okra festival.”

She said last Saturday was supposed to be the opening of the Dr. Martin Luther King Jr. monument in Washington, D.C., “And I can just feel Dr. King smiling down on us because this was how he envisioned the beloved community… everybody getting along. This is what this okra festival has morphed into.”

She said most other festivals are commercial, “But everything here is homemade.” She also said, the “best part is seeing people interact with each other in love.”

This years’ event featured live entertainment, which was scheduled to include Jerome Hardy and Da College as well as the Hall Sisters.