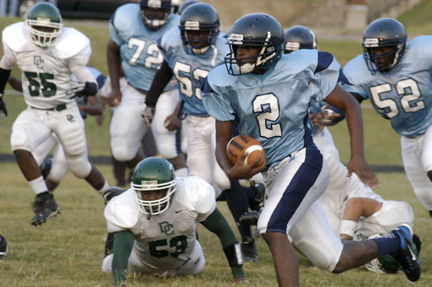 Calhoun's Devel Goldsmith goes on the run against Dallas County in a football jamboree played at Calhoun, Friday night.

Defenses dominated and offenses sputtered in a 9-6 football jamboree game won by the 4A Dallas County Hornets over the 2A Calhoun High School Tigers at Calhoun in Letohatchee, Friday night.

Dallas drew first blood when Calhoun quarterback Devel Goldsmith was caught by a swarm of Hornet defenders in the end zone for a safety with 29 seconds left in the first quarter.

The Hornets took a 9-0 lead when Jamarius Barnett scored on an 82-yard interception return and PAT with 2:32 left in the half.

But the Calhoun Tigers had some fight left in them when Quinton Green returned a Dallas County fumble for big yards and Jamichael Jackson caught a pass for a touchdown with 10:31 left in the third quarter. That closed the gap to 9-6, but the Tigers could not pull off the win.

On the night Calhoun had 67 yards rushing and 65 yards passing for 132 yards of total offense.

Dallas County had 50 yards rushing and 24 yards passing for 74 total yards. But Dallas County picked up six first downs to two for Calhoun. Both teams suffered one interception each.

“I thought we played hard in spurts. Defensively we looked pretty good the first two quarters,” said Dallas County head football coach Willie F. Moore. “Offensively, we couldn’t sustain a drive, so the defense stayed on the field a bit longer than we thought. We sort of expected that. We’ve got a lot of improvements to make. That’s why we wanted to play this ball game.”

Moore said he felt pretty good about his defense as a whole. “The first half we played well. The second half we sort of lost containment, but a lot of that was because we couldn’t sustain any drives form the offensive standpoint. We just couldn’t get any production like we wanted to.”

“I thought they played hard and played well,” said Calhoun head football coach Bill Williamson of his Tigers. “I though we could have easily won.”

Williamson said his team dropped one touchdown pass, but he was pleased with the effort and pleased that his team stayed together.

“I mean, I was real pleased against a 4A competition,” he said.

But he said he thought Keith, which Calhoun opens the real season against may be better than the team they faced in the jamboree.