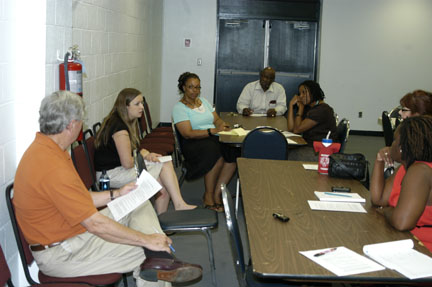 The Lowndes County delegation of the River Region Obesity Task Force will work to help develop community level resources to fight obesity in the county.

What is obesity and why an obesity task force in Lowndes County?

Obesity refers to an excessive amount of body fat, according to the National Institute of Diabetes and Digestive and Kidney Diseases.

The River Region Obesity Task Force was formed because the Montgomery Metro Area is tied for the most obese metro area of the United States with Stockton, Calif. for adults with an obesity rate of 34.6 percent, according to the Gallup-Healthways Well-Being Index collected in 2009 and Sara Byard, project Manager for the Central Alabama Regional Planning and Development Commission.

According to Gallup, more than one-third of adults are classified as obese in the 10 metro areas found to be most obese.

Helping to develop community level resources to fight obesity was one of the action items developed at a meeting of the Lowndes County delegation held in Hayneville at the County Commission auditorium on Thursday.

“I feel like in the meeting today we developed a direction for the River Region Obesity Task Force in Lowndes County. And I think that we will be able to make some very positive changes over the next three years. And I’m very excited about working with our local Lowndes County delegation, our County Captain Katanga Mants,” said Byard.

Among those attending the meeting were Jennifer Cole of UAB Reach Up and Out, Ransom Williams of Bancorp South Bank, Shakirah Tajuddin of the Department of Human Resources in Lowndes County, Sherrie Jiles of Head Start in Lowndes County, Fletcher Fountain, mayor of Fort Deposit, Mants, county extension coordinator for Lowndes County, and Byard.

Byard said a proposal of action items to address obesity presented Thursday came about following a Center for Disease Control CDC change tool assessment in which people were polled in the community. She said people were brought from the community at large, institutions, organizations, work sites and schools.

She said an action plan would be formulated over the next three years to try to make some positive changes to help reduce obesity.

Other action items discussed and agreed to by the local delegation include:

•Encourage local governments to enhance safety at places where people can exercise within 24 months.

•Develop wellness goals and strategies in 27 River Region governments and at least 15 private employers over three years. Encourage and facilitate the use of insurance incentive polices for wellness and tobacco use, as well as pool resources to develop employee clinics.

Assure that all six public school system in the Region have at least 30 minutes of physical education per day for elementary and middle school student by Aug. 15, 2013.