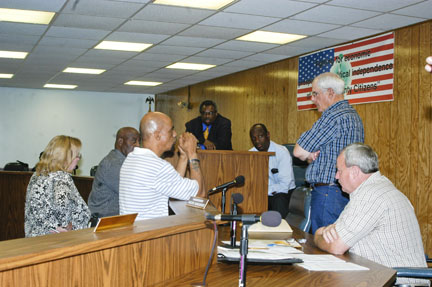 By Fred Guarino The Lowndes Signal

Representatives from the town of Fort Deposit came away empty handed from the Lowndes County Commission meeting Tuesday night facing the task of coming up with additional revenues to make a new funding agreement for a bond issue for the town acceptable to commissioners.

Complicating the matter, it could mean a sales tax increase for Fort Deposit. But that all depends on where a penny of sales tax already being collected is going.

“Under the existing agreements, the county is obligated to pay a certain amount of tax, ad valorem taxes, collected on the Sejong site,” said Arlene Richardson, Fort Deposit attorney. “They’re wanting to reduce their amount of tax. The only avenue we have to make up that reduction that they want is to raise a penny tax or half cent tax on sales tax in Fort Deposit.”

At present, Fort Deposit sales taxes are 10 cents on the dollar, according to Richardson. But there is a question as to where one penny of that tax is going.

“The first thing that has to happen is we have to find out where the penny that is not going to the county is going. We think it’s possibly going to some sort of educational tax,” said Richardson.

“If it’s not, then we won’t have to raise it because we’re already collecting 10 cents. Otherwise the council will have to discuss raising the tax by the half cent or cent,” she said.

A call to Priester’s Pecans in Fort Deposit confirmed that sales tax collected is 10 cents on the dollar.

Since the County Commission did not vote on the matter Tuesday night, Richardson said, “We’ll have to come back to their next meeting on the 13th (of June) to find out what to do or what we can do.” We are all limited in resources. That’s the problem.”

Hank Sanders, who serves as county attorney, said the commission went into executive session Tuesday night regarding the bond issue because it had to discuss legalities regarding negotiations that could not be done in public.

Following the meeting Commissioner Dickson Farrior said, “The county is already obligated for this money. And if we go ahead and approve this and possibly put a cap on it that, you know, everybody comes out ahead.”

He said, “And if we put the cap, the county will get some money and Fort Deposit will keep operating and that wouldn’t be good for the city not to operate. So it’s a situation that needs to be worked out.”

Commission Farrior told Perry Kelley that he would talk to the mayor of Lowndesboro regarding a request for a fire hydrant for Baptist Hill Missionary Baptist Church.

In actions taken Tuesday night, the commission •Approved an off premises beer and table wine license for the Letohatchee BP. •Approved a consent agenda including a support letter for section 53.11 Public Transportation, a postage machine agreement, a cell phone policy agreement, an appropriation for the Lowndes County Community Life Center in the amount of $1,500 and an appropriation to Reach in the amount of $1,000. •Approved an appropriation to send five gifted teacher students to the National History Day in College Park, Md. and $5,000 to the Boys and Girls Club.