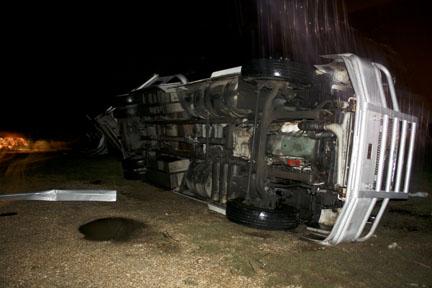 A tractor-trailer overturned in a resident’s yard on Highway 37.

By WALTER HILL
Special to The Signal

Last Monday evening residents in the Burkeville community of Lowndes County along County Road 37 (Deer Trace Road) were overwhelmed with devastation and destruction resulting from what has been confirmed by the National Weather Service as an EF1 Tornado which impacted the community around 5:45 p.m. Monday evening, according to Lowndes County Emergency Management Agency Director Walter S. Hill.

Director Hill said that calls begin to come into the County 911 dispatchers reporting the damage at approximately 5:45 p.m. Monday evening, at which time law enforcement officials along with first responders from Burkeville were dispatched to the area.

“When I arrived it was a horrific scene with massive damage to homes and property in the area,” said Director Hill.   “Emergency personnel and I immediately begin to make sure that all residents in the impacted area were accounted for and by God’s grace everyone was accounted for and no one had sustained any injuries.”

Uprooted trees, roofs completely blown off the Casey’s home as well as several other roofs were blown off homes along County Road 37 in the Deer Trace Road community, according to Hill.

A tractor-trailer with a mobile home attached to it was  blown over onto its side with huge amounts of debris from adjacent neighbor homes and property were blown into and onto other residents property between a mile or two away.

Casey’s Farm received a huge amount of damage to the facility with three elevators destroyed along with several other components of the feeding equipment were destroyed, according to Director Hill.

Officials from the National Weather Service met with Director Walter S. Hill early afternoon on Tuesday to complete a full assessment as to determine what occurred on Monday evening along a five-mile radius of County Road 37 from Hayneville to Deer Trace Road.

By late Tuesday evening, it was confirmed what had been feared, an EF1 Tornado had touched down in the Lowndes County community with winds exceeded 110 mph within a five-mile radius.

Director Hill and Lowndes County Sheriff John Williams who along with several deputies who responded to the scene said that it was a “true blessing” that there were no injuries and no loss of life.

“We can be grateful that God speared the lives of the residents, home can be repaired and rebuilt, but lives lost can never be replaced,“ said Sheriff John Williams.

Director Hill stated that also there was a massive power outage in the Hayneville area for several hours as well was other parts of the County which were left in the dark for a few hours before all power was restored in a short period of time.

In addition, several automobile accidents occurred during the height of the severe weather.

Lowndes County was under a Tornado Watch at the time of the tornado touch down, according to Director Hill.