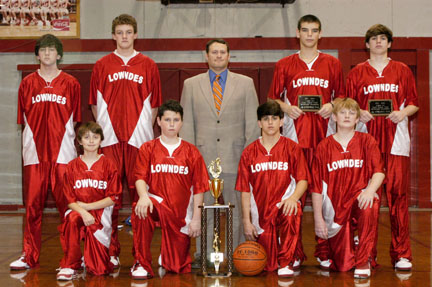 The Rebels overwhelmed the Patrician in their first bout, leading the Saints the entire game to win 35-20 in the final.

Next, the boys had the opportunity for redemption against a team who defeated them twice during the regular season–Lakeside.

The Chiefs led the Rebels 20-12 at the end of the second half, giving Coach Matt Marshall the opportunity to make adjustments.

“The main difference in the second  half was the face that we adjusted our defense to take away their stronger players,” said Marshall. “We out-rebounded them in the second half.”

Lowndes Academy would advance to play Escambia in the final game of the tournament after slighting the Chiefs 37-35 at the buzzer.

“I knew if we could get to that game, it was no longer about coaching, it was about motivating them to fight through fatigue and leave it all out there,” Marshall said.

The Rebels battled hard against the Cougars, trading leads several times throughout the game.

However, the JV boys secured a 35-32 win when it was all over taking home the title of State Invitational Champions.

Marshall commented on the high degree of team work this year’s team has demonstrated, noting his interest in seeing the athletes strive in other sports.

“I’ve coached several teams in the past that have one State Champions,” said Marshall. “But, I don’t know if I have ever coached a team that relied on each other so much. It‘s amazing what team chemistry can do in helping achieve the dreams of youngsters.”