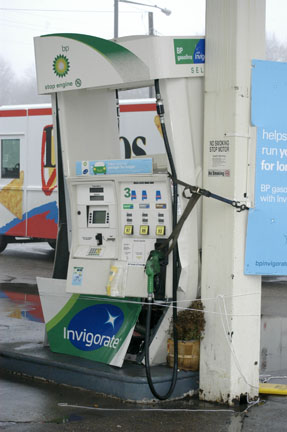 An 18-wheeler collided with a gas pump at the BP gas station in Lowndesboro Jan. 24.

The Lowndesboro BP gas station was forced to shut down its pumps Jan. 24 after an 18-wheeler collided with one of them.

The accident occurred about 11 a.m. while the driver of the truck was shopping inside the BP station, said employee Asmita Patel.

“The driver wasn’t even in his truck,” Patel said. “It took off by itself.”

Patel noted, no fuel was spilled since the gas pumps are wired to automatically shut down once one goes offline in case of an accident or other emergency.

Customers were given access to one pump the following day and the second unit is expected to be repaired within a few weeks, said Patel.

No one was hurt as a result of the collision.