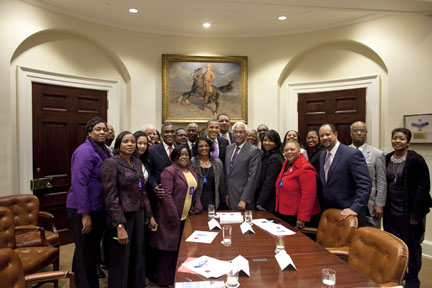 Hayneville Mayor Helenor Bell (front left) poses with United States President Barack Obama and other members of the National Policy Alliance at the White House in Washington, D.C. on Dec. 14.

Town of Hayneville Mayor Helenor Bell recently returned from a trip to the White House in Washington, D.C. to meet with Barack Obama and the National Policy Alliance (NPA).

“It was a very productive meeting,” said Bell. “We wanted to talk to the President regarding the economic state of our local areas, the bill that went through extending unemployment benefits and about several other issues that affect us.”

The NPA is a partnership between ten organizations that represent African American elected officials and their constituents.

The President discussed benefits the bipartisan tax agreement will have on the voters the elected officials represent, according to a press release.

Participants acknowledged parts of the tax agreement they do not support, but noted portions of the agreement will help struggling families.

Noted provisions included the Earned Income Tax Credit extension, the 13-month extension of unemployment benefits to those searching for jobs, the payroll tax cut and the American Opportunity Tax Credit, which aims to assist students and their families toward paying for college.

Bell said she felt privileged to take part in the discussion and “to bring a small town like Hayneville in the forefront on issues that are going on today.”

No specific date has been set for a follow-up meeting with the NPA, however Bell noted the date will be in the Spring of 2011.

“The President is very concerned about our present economy and unemployment rate,” said Bell. “He seems committed to helping us with economic development.”