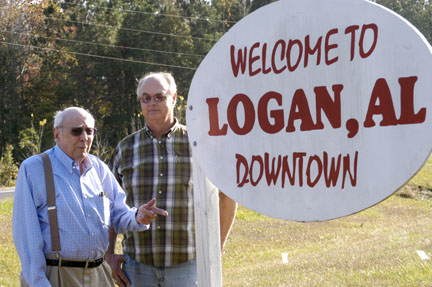 Bill and Thomas Bates of Bates Turkey Farm in Logan and Bates House of Turkey in Greenville pose for a photo next to the “Welcome to Logan” sign before the Thanksgiving holiday.

As many families sit down around the table for the Thanksgiving holiday, few may realize their main course comes from within their own community.

Bates Turkey Farm of Logan has raised and smoked turkeys for nearly a century and has proven itself as an important commodity to the surrounding counties and communities.

Bill Bates, owner of Bates Turkey Farm and Bates House of Turkey in Greenville, was raised in the Logan community since he was a child and said he helped the community establish its name.

By painting the word “Logan” on either side of a boiler used from an old cotton gin across from his house after a man that owned a good bit of property in the area, the town would later come to be known as Logan, Bates said.

In addition to naming a community, Bates is known as a pioneer for furthering the turkey smoking process, said Thomas Bates.

“My dad, Bill, was the first person ever to further the process for smoking a turkey,” Bates said. “Smoked turkey is what put us on the map.”

The farm raises turkeys from June through November. When the weather begins getting cooler, the farm sells off its birds until the summer months.

Bates purchases the turkeys shortly after they hatch and transports them to the Bates Farm where they are raised anywhere from 12-17 weeks.

“When we get the babies, they only weigh about an ounce,” said Bates. “They will triple in size in a week’s time.”

Bates said the tom turkeys will “bow up and gobble” by day two, before they grow any tailfeathers.

Each bird, on average, costs $10 to raise for the four month period, excluding costs of purchasing and transporting the fowls.

The largest fowl the Bates farm has produced weighed in excess of 52 pounds and was just over 17 months old.

Bates has also provided the turkey annually pardoned by the governor for the past 62 years — since the annual tradition began in Alabama, said Bill Bates.

Thomas generally hand picks the turkey scheduled to be pardoned.

Thanksgiving is the time of year when the Bates family begins to see profit for their hard work, however Christmas always draws better business for the family, said Thomas.

“People are usually looking for quick and easy gifts to send their relatives,” Thomas said.

The farm will send birds to be sold to the Bates House of Turkey in Greenville before they are shipped across the nation to their final destination.