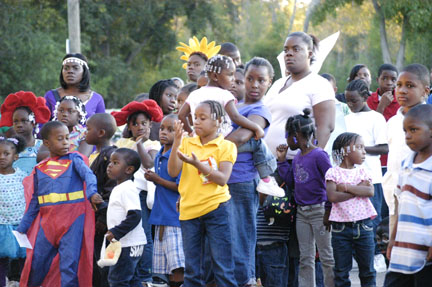 Hundreds of people turned out to Hayneville’s Fall Festival last Sunday to celebrate Jesus and enjoy food and games.

The town of Hayneville recently gave its residents the opportunity to enjoy good old fashioned fall fun and celebrate the name of Jesus.

Pastors Franklin Nettles and Johnny Bandy opened the celebration with prayer saying that Halloween has traditionally been a celebration of the Day of the Dead.

Now in its seventh year, the festival continued its tradition in celebrating Jesus Sunday with Bible games, hay rides and basketball games.

“I’m thankful for everyone that participated, volunteered and donated to the event this year,” said Hayneville Mayor Helenor Bell. “It was fun and a good time for everyone.”

Hayneville’s Fall Festival was guest to nearly 200 men, women and children who came to enjoy good company and see the many children dressed in some of the most creative costumes.

Bandy, Nettles and the town of Hayneville are already preparing for next year’s Fall Festival and the new series of activities that will be featured.

By EASON FRANKLIN The Lowndes Signal As the holiday season approaches, one Lowndes County community is preparing for its upcoming... read more