The Tigers came into the first quarter strong scoring three touchdowns in the first quarter.
Calhoun tight end Keldrick Exford scored the first touchdown of the game on a 10-yard run and followed up with a two-point conversion against the Lions.
Running back Quanicholas Taylor earned Calhoun another touchdown on a 10-yard run in the first.
The Tigers were successful on their two-point conversion with the help of fullback Trevontae Hardy.
With 2:36 remaining in the first, the Tigers picked off a pass from the Lions and ran it back for a Calhoun touchdown.
Central’s Lions were at a disadvantage this week after quarterback Tracy Tillman suffered a broken leg in their game against Billingsley.
After a bad snap, Exford rocketed a short pass to junior Jonterrence McCray for a two-point follow-up.
By the end of the first quarter, Calhoun’s Tigers were up 22-0 over Central-Hayneville.
Exford soon took advantage of the second quarter scoring another touchdown on a five-yard run.
Running back Jermicheal Jackson earned the Tigers another two-point conversion on a 15-yard run after he was tripped up by the Lions.
Calhoun quickly found themselves on the Lions’ one-yard line, allowing McCray to run the ball in for a touchdown. The PAT was no good.
Devel Goldsmith of the Tigers earned his first touchdown of the game on a 14-yard run with 1:55 remaining in the first half.
After a two-point conversion by Exford, the Tigers were up 44-0 at the half.
Calhoun scored their final touchdown of the game with the help of Jacqun Caldwell on a 30-yard run over the Lions bringing the score to 50-0.
“We pretty much hit on all cylinders,” said coach James Bibb of Calhoun. “We are a much better team than our record indicates.”
Bibb said this marks the beginning of next season for both the Lions and Tigers and said Calhoun will keep working to improve their record next year.
Central-Hayneville coach Keith Scissum said his team will work to make it better next year. 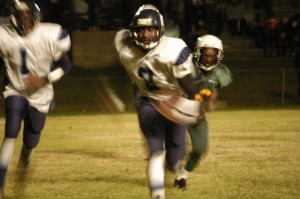 Jimbo Wheeler pulls his own weight at the “Pull Your Own Weight” machine at the McWane Center in Birmingham. By... read more