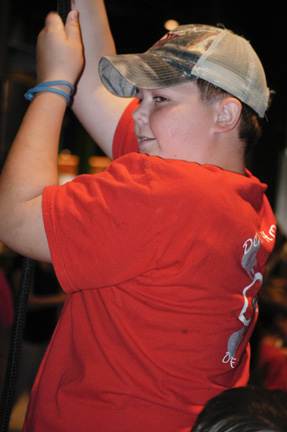 Jimbo Wheeler pulls his own weight at the “Pull Your Own Weight” machine at the McWane Center in Birmingham.

The handful of sixth-grade children took last Friday to learn about chemistry, physics, math, animals and much more on a field trip to the Magic City.

Students made their way through four levels of exhibits, such as the bed of nails and hurricane booth exhibits.

The McWane Center was the chosen destination to allow the students to “enhance their feel of science and get a visual of how things work,” said Lowndes Academy sixth-grade teacher Amber Lyon.

“I have taken trips to the McWane Center before,” Lyon said. “It’s fun and educational.”
Many of the kids visiting battled each in a tug-of-war game using the giant chaotic pendulum. The exhibit got the most attention of any other at the center.

After each small group finished looking at and playing with the exhibits on one floor, all would move to the next floor and series of exhibits.

The children hope to take another big field trip before the end of the year, said Lion.

“We’re in the process of getting to go to the Hyundai plant in Montgomery and maybe even to Atlanta to visit the aquarium,” Lion said.