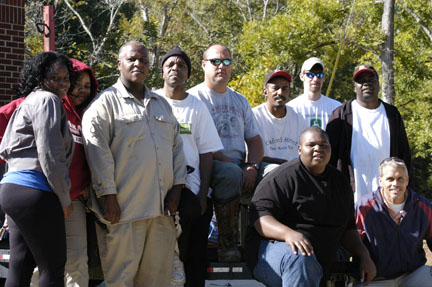 The VFD received a classification of 10 by the ISO during the first quarter of 2010 causing resident’s homeowners insurance policies to increase upon renewal, said volunteer firefighter Ronnie Daniels.

ISO evaluates fire departments every two years, but will return upon request after one year.

Holmes said the department will request a re-evaluation during the first quarter of 2011 and is aiming for a rating of six.

Over the past several months, the VFD has implemented new and improved training and administration methods to improve this rating.

The department is constantly holding fundraisers and accepting donations to purchase additional equipment.

“We can ask for donations from citizens, but we are shooting for Emergency Management Agency (EMA) funds and Assisted Firefighter Grants (AFG),” said Holmes. “AFG is the one everyone goes for…that’s the big one.”

Several new volunteers have joined the Hayneville VFD over the past month taking on various responsibilities.

Hundreds of responsibilities are open to volunteers, but Holmes said the department needs manpower.

It is mandatory for each volunteer to complete 12 hours of training within a year — about one hour per month.

However Hayneville’s volunteers have received a total of 293 hours since the beginning of the year.

Hayneville’s VFD responds to an estimated six-to-eight calls per month and assists a majority of Lowndes County, Holmes added. Call responses do not count toward training.

“When we go to a fire, it is all about business,” Holmes said. “But, I will not ask anyone to go into a fire if they don‘t feel comfortable.”