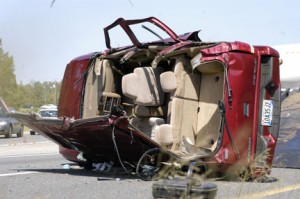 A wreck along Interstate 65 in Ft. Deposit left a woman trapped in her SUV forcing workers to use the jaws of life to cut her free.

Traffic came to a standstill Friday at mile marker 142 along Interstate 65 in Ft. Deposit after a wreck left a woman trapped inside her vehicle.

Emergency workers and first responders arrived at the wreck to find off-duty nurses and EMTs Sarah and Darrell Critzer and Tina Fulford tending to the victim’s injuries.

“All I can say is that she was stable when paramedics took over,” said Darrell.

The woman sustained minor cuts, scrapes and bruises, according to Fulford, but was rushed to the hospital via helicopter.

According to Sarah, the woman allegedly overcorrected when the vehicle began to swerve into the median of I-65 and landed on its side in the Southbound lane of the interstate.

First responders had to cut off the roof of the SUV with the jaws of life to reach the injured woman.

Military clothing contract could have positive effect in Lowndes