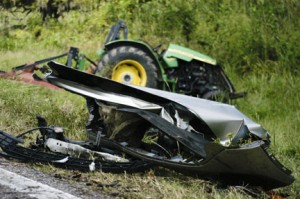 The driver of the tractor involved in Monday’s accident was airlifted to Baptist East Hospital after having his right foot amputated as a result of the wreck.

Two people were rushed to Baptist East this afternoon when an SUV collided with a tractor along Highway 80 West.

Witnesses said the wreck occurred around 10:30 a.m. and that the tractor rolled four times before ejecting the driver onto the side of the road.

“When I pulled up, the SUV was still rolling at a slow speed,” said Arthur Gary of White Hall. “When we got it stopped, the driver was in the back seat.”

The driver of the tractor, Johnny Lee Smiley, 61, had his right foot amputated and a large cut along his leg as a result of the wreck, according to Gary.

County EMA director Walter Hill said Smiley was air lifted to Baptist East and the driver of the SUV was transported via ambulance.