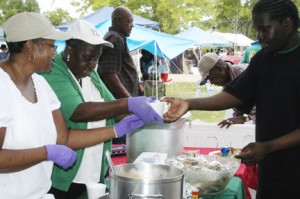 Lowndes County residents and visitors from near and far turned out on a hot humid Saturday for the 10th annual Okra Festival for food, music and fun.

Guests lined up as local vendors sold everything from jam, jelly, catfish plates, barbecue, ice cream and, of course, every kind of okra that can be imagined.

Guests and visitors toured Annie Mae’s Place to view the various arts and crafts featuring civil rights era pieces and commuted across the street to partake in the $5 camel rides.

The Okra Festival originally began as a neighborhood party for the community of Burkville, according to Barbara Evans.

Evans partnered with her friend Alice Stewart to gather local artists, quilters and crafts people, but has said she never expected it to get the publicity it has gained over the years.

The annual festival has been recognized as one of the top ten events in the southeast from Deep South Magazine.

“What has made this event such a success is the fact that nobody’s really in charge or in control,” she said. “It’s very laid-back and just something for every body to enjoy without having to worry about anything.”

This year’s Okra Festival was sponsored in part by Lowndes County Commissioners W. Dickson Farrior and Joey Barganier as well as the Black Belt Community Foundation, according to Evans.

Evans commented that were “probably more people at the event this year than last year.”

Across the street from Annie Mae’s Place in the Stewart’s front yard was a sign that said “He would have wanted us to carry on.” A black ribbon was placed alongside the sign in memory of Stewart.