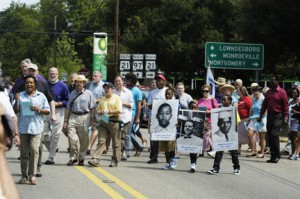 Visitors from across the nation celebrate Hayneville’s annual pilgrimage from the Courthouse Square through the streets of Hayneville to the old jailhouse and the old Cash Grocery Store where Jonathan Myrick Daniels was shot and killed by a shotgun blast in 1965 while trying to defend then 16-year-old Ruby Sales.

A historical Lowndes County pilgrimage last Saturday brought in nearly 200 people from Lowndes County and around the country to honor to a man killed during the civil rights era.

Hayneville was host to the annual march from the courthouse square down to the old jailhouse and then to the old Cash Grocery Store. The march was to honor civil rights advocate Jonathan Myrick Daniels and others who lost their lives during that time.

Daniels was shot and killed Aug. 20, 1965 when he jumped in front of a shotgun blast to protect 16-year-old Ruby Sales when she attempted to enter a store to buy a drink.

Geraldine Gamble, who was also imprisoned during the time Daniels was jailed at the old jailhouse, gave an account to her experience during that time.

Gamble was out of school for summer break in 1965 when she had the opportunity to meet many civil rights activists and marchers.

The group made plans to march in White Hall shortly thereafter, but were arrested for not having a permit.

“Before we could hit the ground they arrested us for not having a permit,” said Gamble. “My mother told me my father was so worried, after I was put in jail, he walked the floor all night.”

Gamble was later released from jail and decided to pursue a career in nursing and education at Alabama State University before returning to Lowndes County.

As the pilgrimage made its way to the old Cash Grocery Store, a speech was given by local Lowndes County resident Debra Harris.

During the speech, visitors approached the front of the building and knelt to place their hand on the ground where Daniels was killed. Some knelt to kiss the ground of the historical site as well.

Daniels, an Episcopal seminarian who worked to help register African-American voters, was added to the Episcopal Church Calendar of Saints and Martyrs in 1994 and is remembered each Aug. 14, according to a press release.

Sales is the founder and co-director of an organization by the name of Spirit House, which works for racial diversity bringing people together for social justice, economic and spiritual development.

Sales was scheduled to be present at the pilgrimage, but was unable to attend the event due to a scheduling conflict.

Local resident Amy James commented on the event and its symbolic nature.

“We can‘t forget what happened in Lowndes County,” said James. “It was all over the news and is not something that should be swept under the rug.”

“I would like to see more people participate,” added James Bishop of the Episcopal Diocese of Eastern Michigan.

The Rt. Rev. Todd Ousley was also a featured guest at the annual event.

Gamble said he has seen a significant change in the attitudes of Lowndes County residents since the civil rights era.