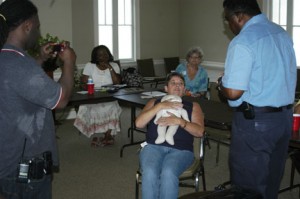 Any cause related to an infants death in Lowndes County always sparks concern among Lowndes County emergency workers and their various departments. Now, local officials are taking an extra step in identifying those causes.

An eight-hour training course on Sudden Unexplained Infant Death (SUID) was held Aug. 5 to further inform emergency workers on how these types of emergency situations should be approached.

SUID is due to a variety of natural or unnatural causes of infant death and is a broader term than Sudden Infant Death Syndrome (SIDS).

This is the first class of this type to be held in Lowndes County and is generally set up by the local jurisdiction at no charge, according to Alabama Department of Forensic Sciences State Chief Medical Examiner Kenneth Snell.

“We teach the attendants how to investigate infant death so they are able to gain accurate and consistent information from those deaths to better determine the cause of death,” said Snell. “We develop community programs to prevent such deaths in the future.”

Emergency workers in attendance learned about infant growth and development, the proper way to  interview people at the location of the death, proper ways to investigate the cause of the death and how to properly photograph and document the investigation.

Hands-on mock-demonstrations were held to help workers better understand their own reactions and responses during an investigation and interview.

Captain Jerome Hardy of the Mosses Volunteer Fire Department commented on the significance of the class and how it pertains to his line of work.

“It’s sad to have had an incident where I was one of the first responders to assess a scene of this nature,” said Hardy. “This class will enhance my ability and capabilities in case future incidents like this occur.”

Hardy added he would pass this information along to other firemen in his department and first responders from other departments in Lowndes County.