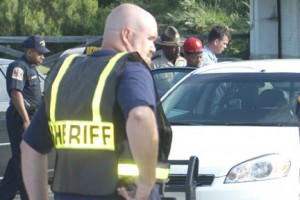 Sheriff’s deputies take a suspect into custody after a fatal shooting claimed the life of a Mosses man early Thursday.

A Mosses man was killed by gunfire in the parking lot of a BP gas station in Hayneville early Thursday morning.

A single suspect is in custody and another is being questioned after officers received reports of a shooting at 6:44 a.m. at the station located located at the intersection of Highways 80 and 21.

Chief Sheriff’s Deputy Lenny Lee said the man was getting gas when a “minor altercation” erupted into gunfire.

The victim, 29-year-old Norman Murphy, pulled up to BP to get gas when he happened upon the two suspects, 20-year-old Ezekial Washington of Montgomery, and a female, whose name is not being released at this time.

Murphy and the female suspect have a prior relationship and a child. Authorities say the female placed restraining orders against Murphy issued in Montgomery.

“The victim noticed a firearm on the passenger-side arm rest when he approached the car and it is believed that Murphy was attempting to assault the female,” said Lee.

Lee said Murphy reached for the firearm leading both the victim and Washington to struggle over the weapon. During the altercation, the weapon discharged sending a bullet into the chest of Murphy.

The weapon had recently been purchased, but the female suspect held no gun permit, according to Lee.

Murphy’s child was in the car when the firearm went off. Chief Investigator Derrick Maull will be heading the investigation.