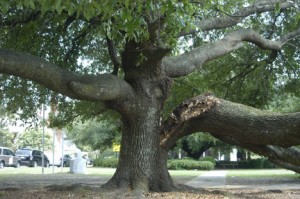 The limb of a large oak tree in the Hayneville town square collapses under its own weight on May 27.

The city of Hayneville will soon have a new look after city and county workers finish removing one of the oak trees from the town square.

Hayneville’s town council may have to remove the remaining part of the tree for the public’s safety after a massive limb from one of the trees collapsed under its own weight around 2:30 p.m. on May 27.

City and county work crews were able to clear some of the debris from the square while workers with Alabama Power and the Camellia Communications removed limbs from around telephone poles and power lines touching the damaged tree.

Another large split in the oak was discovered during clean-up efforts, leaving Mayor Helenor Bell no choice but to remove the nearly 35-year-old oak.

David Daniel, mayor pro-tem and former Lowndes County Extension worker, found problems with the trees in April. Daniel will be recruiting a horticulturist to further examine the trees to determine their health, according to Bell.

“Problems with the trees were brought to the council’s attention at our last town meeting,” said Bell. “Solutions for the square will be discussed during the June 14 meeting.”