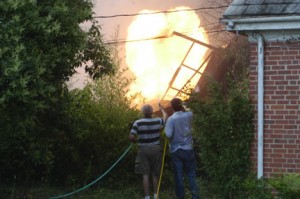 An “all call” bulletin was issued across Lowndes County requesting all available fire departments to respond to a large structure fire in the downtown area of Ft. Deposit.

Heavy smoke and flames threatened local businesses and homes by launching cans of spray paint onto roofs, parking lots and yards around 3:30 p.m. on May 26.

Ann Wilkinson, whose home was positioned directly by the building on fire, said she “called 911 twice” when she noticed the flames.

“I heard something explode every few seconds,” said Wilkinson. “When I noticed the smoke out my window, I called 911.”

Lee-Mac Auto Parts was also directly threatened by the flames after a can of spray paint exploded and was launched onto the roof of his building.

Firefighters from Sandy Ridge climbed to the roof of Lee-Mac Auto Parts, while volunteers from the Burkville VFD attacked the inside of the building to extinguish flames caused by a projectile spray paint can, according to Ft. Deposit Fire Chief Eric Jackson.

“Our main goal was to preserve the other businesses and homes threatened by the fire,” said Jackson.

Though small flames from scattered debris within the structure continued to burn out, the bulk of the fire was contained around 6:00 p.m.