Gordonville resident to be featured on television after winning contest 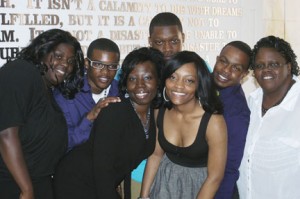 Hosted by alumni of Central High School, the competition was held at the school’s cafeteria.

Participants from Five Points, Gordonville and Mosses gathered with friends, family members and alumni for their chance to win $300.

“It’s exciting to see a new atmosphere in Lowndes County,” said Alumni President Teresa Nettles. “We are grateful to Principal Peggy Grant for opening the doors to the school and allowing us to hold this competition.”

During the first round, singers chose songs from the Traditional Gospel category that would best demonstrate their vocal abilities.

The three judges analyzed each of the contestants on their stage presence, vocal technique, connection with the audience and articulation and creative styles.

“It was a good experience,” said Means. “I’m really looking forward to next year’s competition.”

After each performance, judges Marilyn Gidley of Frontline Enterprises, screenplay writer Larry Dunkin and minister of music Derrick Ross from the D. Ross and Higher Calling recording group offered compliments and constructive criticisms to each of the contestants regarding their art.

The competition continued into the Contemporary Gospel genre and the remaining five contestants belted-out songs with as much energy as could be mustered.

Kendrick Wright and Javarious Hardy were the next two participants to be eliminated from the competition.

“The alumni did a good job coordinating this event,” said Hardy. “I was here to sing for the Lord and had fun.”

The final round saw three remaining contestants. As Trone, Stewart and Travis Wright each made their ways to the stage, the judges were faced with the challenging task of who would become the overall winner.

Singers had their choice of any song that would best encompass their abilities and began to sing as they were backed by the three-piece Alumni band.

When the final round was over, two of the contestants found themselves locked in a tie.

Stewart and Trone were given two minutes to come up with a song that had to be sung a cappella.

Both girls gave their all in the tie-breaker with melismatic musical phrases used to hit notes of uncanny registers.

In the end, the Trone was judged as the winner of the competition and was awarded the $300 prize.

When asked what she would do with the prize money, Trone responded, “I am going to pay my bills.”

The judges had trouble determining a winner with such amazing talent being demonstrated by all the contestants.

“It was a hard competition,” said Gidley. “Now I realize what Simon, Paula and Randy go through on American Idol.”

Gidley and her business partner Patrick Williams will be featuring some, if not all of the contestants on her television show based out of Prattville entitled Time to Shine.

Church explores love within the community