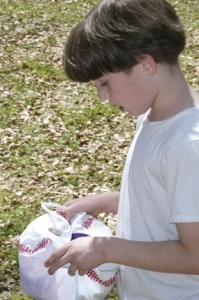 Children in K-4, K-5, first and second grades lined up in masses in the afternoon sun, getting set to race for eggs placed in obvious and not-so-obvious hiding places.

Students, parents, friends and faculty members also gathered at the front of the park anticipating the start of the hunt.

The children prepared for the signal to start by first-grade teacher Michele Rogers as she explained the boundaries which the eggs could be found.

“Do not go into the woods,” said Rogers, as she anticipated many would spring to that direction first.

Many of the students split routes with a goal of finding 50 eggs to fill the various containers they carried.

Little feet could be heard darting through the field followed by laughter, panting and counting as the kids began to accrue more eggs than their baskets could hold.

Some even took it upon themselves to line their pockets with the plastic shells.

As one child would race to one end of the field, another would jolt to the same area in hopes of being the first to find the infamous golden egg.

While the students hunted the park, the Easter bunny made his way to the front of the gated area preparing for an onslaught of excited children.

The hunt lasted a grueling 45 minutes as none of the participants could find that golden egg.

Rogers soon gathered the attention of all the students and parents to move to the corner of the field to the general area of the last egg.

Those adults who had an idea where the golden egg could be found began hinting to the children as to if they were getting warm, hot or cold in their search attempt.

Masses of students swarmed into one local spot until that massive golden egg was discovered by first-grader Jack Barnes.

After the hunt, everyone casually made their way back toward the entrance of the park to fix themselves plates of food and grab drinks from the coolers, which were spread out strategically.

The parents and faculty members chatted and took pictures as the Lowndes Academy students visited with the Easter bunny, played games and drew on the cement with sidewalk-chalk.

One of the many purposes of the event was to draw new students to the school, according to Headmaster Chuck Insinga.