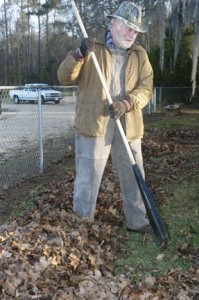 Will Frank Autrey sweeps leaves away from headstones and the surrounding fence at the New Bethel Cemetery in Braggs.

In an ongoing effort to keep up the appearance of the cemetery, members from both congregations gathered in the brisk, early morning weather to rid the lot of leaves and brush.

Headstones throughout the cemetery held names dating back to the pre-Civil War era and ranging to present day, with some gravesites marked only with stone and the initials of those buried there.

Joyce Crook commented on the continued endeavor saying, “We’ve been doing this as long as I can remember.”

The Cemetery Association was formed a few years ago to coordinate efforts between the churches to maintain the appearance of the cemetery lot.

Prior to the group’s formation, upkeep for the cemetery was completed by volunteers within the church and community.

Founding church members are now buried in the cemetery and a lot of the church’s history lies with them.

“Some of the church’s early history has been passed down orally by previous members,” said Cemetery Association member Derril Strickland.

Originally, the New Bethel Baptist Church was located adjacent to the cemetery in what was believed to be a log structure around 1828, according to Strickland.

Near the church’s initial location was a spring-fed baptismal pool, which was used by both African-American and Caucasian congregations for over 100 years.

Three acres of land were purchased from Wiley Jones and wife, Theyney Jones by the church for $100 in 1840 and delivered the deed to Deacons Elisha T. Bozeman and Joseph Casey. The transaction included land, the church building and the adjoining cemetery.

New Bethel Baptist Church was torn down and relocated in September 1909 from its original site to face Highway 21 in Braggs.

Strickland and his wife, Belinda, have tended to the cemetery for 23 years with the help of volunteers from the congregation and members of the Cemetery Association.

“The area’s demographics have changed due to the passing of some members,” said Belinda Strickland.

The churches also hosts other community projects and gatherings throughout the year including the recently held Backwoods Buffet in January.

Members brought wild game and potluck suppers amongst the many other items as the gathering in support of local hunters.

Church projects are open to anyone and everyone within the community for fellowship and to get to know people within Lowndes County.

Last month the class adopted a mile along Highway 21 and is in the process of scheduling dates for additional community cleanup projects.

Both the Baptist and Christian churches alternate Sunday services and Vacation Bible School.