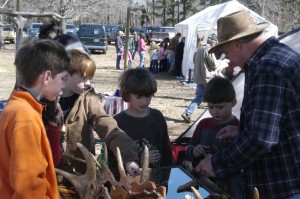 Over the years, Lowndes County has served as a host to numerous events concerning the heritage of many cultures. An ancient custom was the focus of one recent outing by some Lowndes County students.

The Southern Sportsman’s Lodge located along Highway 80 in Tyler hosted the second annual Flint Stone and Bone Creations Knap-In and Primitive Crafts Festival this past Friday.

The primary purpose of the gathering was to learn about knapping, and it was not the kind children take after lunch.

Knapping is an old method by which stone is broken or chipped with sharp blows to create knives, arrowheads or other tools.

Lowndes Academy’s kindergarten through fifth-grade classes journeyed to the Lodge sporting positive attitudes and vivid imaginations to observe the process in action.

“It was fun for the children,” said second grade teacher Rachel McCurdy. “The kids learned how to make fire and knap arrowheads.”

Owned by Stanley Payne and wife Becky, Flint Stone and Bone Creations originated in October of 2005 and is host to numerous Native American items and artifacts.

Vendor tents dotted the landscape surrounding a lodge that was overflowing with arrowheads, knives and other items for the guests to examine and purchase.

“The kids had a lot of fun today and really enjoyed themselves,” said Matthew Callaway, parent of Dakota and Daniel Callaway. “As an avid hunter, it was very interesting to watch the process.”

Afterwards, the children ventured into the Sportsman’s lodge to see the walls adorned with an abundant display of taxidermy prior to enjoying popcorn, barbeque and soft drinks.

Since the Knap-In opened, it can be seen during Spring and Fall at various Native American Festivals and Knap-Ins across the Southeast.